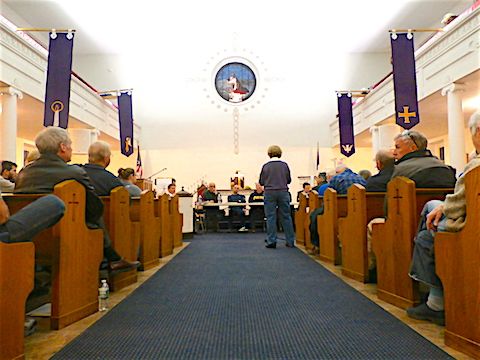 Above: Dawn Johnson addresses the Schoharie Town Board about stone mining in Schoharie before a crowd of concerned residents in April 2016. Photo by Timothy Knight.

Members of the Schoharie Town Board voted down a motion to pull out of a proposed settlement with Cobleskill Stone Products (CSP) on Wednesday, June 8, according to a Times Journal article by reporter David Avitabile.

Proposed after 11 years of legal court battles between the municipality and the stone company that have cost the town more than $500,000, the settlement has been fiercely opposed by the public.

In April, over 100 Schoharie residents, including Village Mayor John Borst, packed into the United Presbyterian Church to signal their opposition to the deal in a public hearing.

Offered by Councilman Matt Brisley, who cited the public's opposition to settling with the stone company, the motion received a second but was voted down 3-1 at the June 8 meeting with only Brisley voting in favor of dropping the settlement, according to Avitabile’s report.

Deputy Supervisor Alan Tavenner explained that he was "not ready to pull the plug on this," according to the Times Journal. Supervisor Chris Tague, who works as the General Manager of CSP, has recused himself from the town's discussions on the matter, which has left Tavenner to oversee the proposed settlement.

Although Tague was not involved in the discussion, he sat at the helm of the board table, and several residents asked him to leave, Avitabile reported. Tague refused, saying he is a tax-paying resident of the town.

"We are supposed to represent the people"

Telling the Watershed Post that he was one of the original members who wanted to explore a settlement, Brisley explained that he thought it was the prudent thing to do after the town had spent so many years and dollars fighting CSP.

However, Brisley changed his mind and decided to make a motion to kill a settlement after taking into account the final product of the settlement and the outcry of many residents in opposition to the deal, he said.

”I couldn't go ahead any longer,” he said. "We are supposed to represent the people. We spent a lot of time on our land use law and I believe we need to let it stand on it's own merit."

Despite voting down Brisley's motion, the town took no further action on the settlement issue at the June 8 meeting. Tavenner did update the town board that land use attorney David Brennan is expected to attend the July 13 town meeting to meet with board members in executive session, the Times Journal reported.

Adding that board members have not discussed the settlement as a group, Tavenner said that the discussion cannot go on forever, but that another month should not make a difference.

The terms of the settlement, if approved by the town board, would both affirm CSP's vested rights to expand its mining operations and end the town of Schoharie’s ability to oppose all permitting involved in mining.

Schoharie votes to refuse settlement with stone company
Eddyville Corp. to town of Ulster: Get offa my limestone quarry