A river runs through it: Local pols applaud the creation of the Delaware River Basin Restoration Program 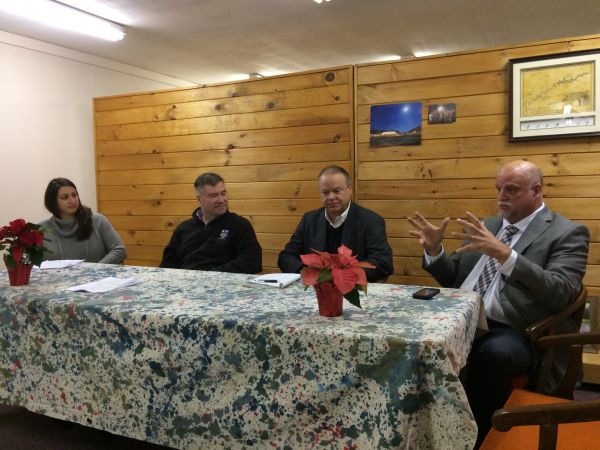 That was the message at a public meeting held to celebrate the recent passage of the Delaware River Basin Conservation Act, held at the headquarters of Friends of the Upper Delaware River in Hancock on Thursday. It was a low-key event, with only about 40 people in attendance. But for the elected officials, environmental advocates and local stakeholders who have been working to get the DRBCA passed, it was the culmination of more than five years of hard work.

The act, which was part of a larger package of water-related legislation, was passed by both the House and Senate earlier this year with wide bipartisan support, and signed into law by President Barack Obama on Dec. 16. The legislation establishes the Delaware River Basin Restoration Program, to be overseen by the U.S. Fish and Wildlife Service, and a grant program designed to assist local restoration and river protection work throughout the watershed.

With the passage of the act, river advocates from a coalition that spans nearly 100 organizations in four states hope to bring national attention and resources to an under-valued — though tremendously important — natural and cultural resource.

The Delaware River begins in Hancock, where the East and West Branch join, and flows some 330 miles eastward to Delaware Bay, where it meets the Atlantic Ocean. Along the way, it flows through communities in New York, Pennsylvania, Delaware and New Jersey, draining a 13,539-square-mile watershed.

More than 15 million people get their drinking water from the Delaware River Basin — a figure that includes New York City, which takes half of its water from reservoirs in the basin. The river is also an economic powerhouse for the region, worth roughly $25 billion in recreation-related economic activity, and another $21 billion in ecosystem services. But despite its importance, advocates say, the Delaware gets little funding or attention compared to the Great Lakes Basin or the Chesapeake Bay Watershed. They hope the new legislation will change that.

The DRBCA “shines a spotlight on the whole river,” said Jeff Skelding, executive director of the Friends of the Upper Delaware River, speaking at the Hancock event.

Outgoing Congressman Chris Gibson (R-19), in one of his last public events as a sitting representative, was on hand to celebrate the passage of the bill, which he helped sponsor along with fellow New York Congressional representative Sean Patrick Maloney (D-18).

Gibson’s successor in the 19th district, incoming Republican Congressman John Faso, was initially expected to be on hand at the event, but did not attend. Gibson said he has been working closely with Faso and his transition team to brief him on the legislation, and on the complex issues of the Delaware River watershed.

Skelding stressed that the act was designed to plan for and fund local conservation work, not to regulate and police land use in the basin.

“This program is non-regulatory,” he said. “The soul of this bill is going to depend on partnerships and coalitions. Folks in local government — rest assured, you will have your say.”

Madeline Urbish, director of the Coalition for the Delaware River Watershed, said that locals would be taking the lead.

“The program is meant to be bottom-up, and to bolster projects already happening in the watershed,” she said.

Hancock town supervisor Sam Rowe said that he hoped the program would be a pilot project for the nation, showcasing the value of combining conservation and job creation.

“There’s more jobs in stream restoration than you can possibly imagine,” he said.

In flood-prone Delaware County, which has taken heavy damage from natural disasters in recent years, funding for locally-driven stream projects is especially important. In 2006, Rowe said, Hancock sustained $18 million in damage to their infrastructure when heavy floods battered the town.

“It took til two years ago to get fully reimbursed,” he said. Rowe hopes the new program will help local communities do critical flood prevention and restoration work.

The effort to pass Delaware River watershed legislation was given a boost by New York State’s 2012 Congressional redistricting, Rowe said. Drawn by a panel of judges, rather than by state legislators, the new districts are simpler and less gerrymandered — and within New York State, the Delaware River and Catskills watersheds are no longer divided by political lines.

“It helps tremendously to have one Congressman for the whole watershed,” Rowe said. “You don’t have to spend a bunch of time telling your story to a bunch of different people.”

Gibson agreed, saying that the 2012 districts were based on “communities of interest,” rather than political expediency. “I think it’s a good example of why we should have independent redistricting across the country,” he said.

Although the legislation is passed, the fight isn’t over. An authorization of $5 million for the program was left on the cutting-room floor at the last minute, Skelding said, calling it a “last-minute glitch.” That means advocates will have to make their case to House and Senate appropriations committees, to ensure that the programs created by the act get funded.

“Our job is far from finished,” said Urbish.

Gibson, who has been a champion of bipartisanship in his three-term career, said that the DRBCA is the kind of legislation on which political opponents can find common ground: a project that supports local jobs, a growing recreation-based economy, and environmental protection.

“It cuts across political parties, it cuts across the ideological spectrum,” he said. “I’ve argued that if conservation isn’t conservative, then words have no meaning at all.”