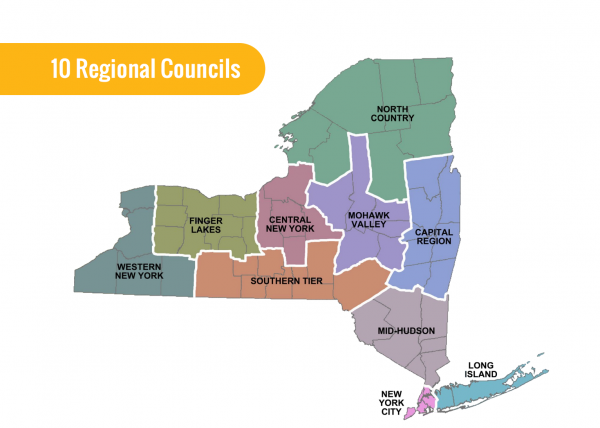 Every December, organizations across New York State get an early stocking stuffer from the state's ten Regional Economic Development Councils: millions of dollars in grant funding. The grant funds come from a variety of state programs aimed at boosting quality of life on the local level, and support hundreds of projects large and small.

On Thursday, Dec. 8, Gov. Andrew Cuomo announced the awarding of more than $700 million in economic and community development funding to 950 projects across the state. Projects located in the Catskills region -- Delaware, Greene, Schoharie, Sullivan and Ulster counties -- were awarded roughly $18.7 million, with about half of that going toward projects in Ulster County. Total funding for the five Catskills counties was smaller this year than in 2015, when the region brought in $26 million in grant funding.

New York State's economic development map splits the Catskills between four different regional councils: Greene County is grouped with the Capital Region, Schoharie with the Mohawk Valley, Delaware with the Southern Tier and Sullivan and Ulster with the Mid-Hudson Region. The rural counties of the Catskills are rarely the ones receiving the biggest and flashiest awards, but there are a few high-profile projects in the Catskills this year. Here are a few selected highlights:

-$1 million to Korean-backed real estate developer Sharon Springs Inc., for the long-stalled restoration of the crumbling Columbia Hotel in Sharon Springs to its former glory

-$750,000 to help Oregon distiller Charles Ferri realize his vision of a craft distillery, boutique hotel, organic farm and event space in the town of Esopus

-$417,650 to the Thomas Cole house, to restore recently-discovered paintings made by the iconic American artist on the walls of his house

-$382,288 to the village of Schoharie, for a new multi-use trail along the Schoharie Creek

In most cases, grant awardees won't just be handed a check: Many of the programs require the grantee to complete the work, and will award the grant as reimbursement when the project is complete. Some grants are announced but never paid out -- like a planned Best Western hotel in Margaretville, a high-profile project that was awarded $1.3 million in 2013, and was left in limbo after the death of local backer Peter Molnar.

Below: A list of Catskills-area projects awarded grants in the current round of funding.

Catskills organizations awarded $26 million in state grants
DEC gives $400,000 in grants to fund parks, paths and signs in the Catskills