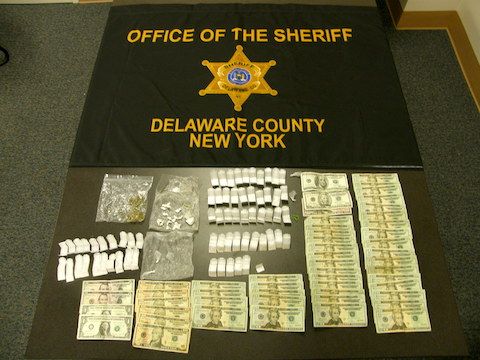 Above: Heroin, cocaine, cash and marijuana seized from a hotel room in Davenport on Tuesday, July 5. Photo via the Delaware County Sheriff's Office.

A 21-year-old man from the Bronx was arrested with heroin and cocaine packaged for sale in a motel room on Route 23 in the Delaware County town of Davenport on Tuesday, July 5, police say.

Peter Balde of New York City was arrested on Tuesday morning and charged with possessing narcotic drugs with intent to sell out of a room at the Rock Inn Motel, which is located just outside the city of Oneonta, according to a Delaware County Sheriff’s Office press release.

Balde was charged with two counts of felony criminal possession of a controlled substance in the third degree and the unlawful possession of marijuana, a violation, police say.

He was arraigned before Judge Lamport in the Town of Stamford Court and was sent to the Delaware County Correctional Facility on $150,000 cash bail, according to the press release.

Drug dealers in the Catskills are “more frequently staying in one community and distributing their drugs in another community to avoid detection and prosecution,” said Delaware County Undersheriff Craig DuMond in a statement.