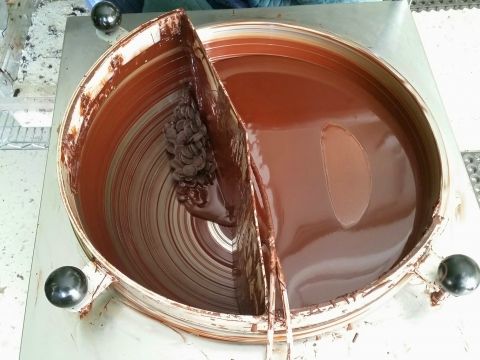 Fruition's chocolate has won national awards—a gold from the Good Food Awards and two silvers from the International Chocolate Awards in 2013 alone. You can visit Fruition's storefront and chocolate factory in the Ulster County hamlet of Shokan, just off Route 28 in an unassuming strip mall.

In a long, narrow storefront in Saugerties, Lucky Chocolates (115 Partition St., Saugerties, 845-246-7337, luckychocolates.com) produces 45 flavors of truffles and other chocolate treats in back, in a Willy Wonka-like chocolate factory filled with delicious smells and busily churning mixers. On every wall, racks of chocolate cooling in pans wait to be sliced by the confectionary guitar.

Up front, a café serves panini, salads and juices made with ingredients from Greene Earth Farm in Palenville.

Alongside the truffles, which come in flavors like pistachio cardamom and Chimayo chili, the top seller is the salted caramel marshmallow, said Rae Stang, Lucky's owner.

The marshmallows are made from scratch, Stang said. “We pour the salted caramel into the marshmallow while it's hot,” she said. “Then we let it cure.” The result, an over-the-top version of a s'more, is impossible not to devour in two bites.

In Phoenicia, the place to get a chocolate fix is the Nest Egg (82 Main St., Phoenicia, 845-688-5851, nesteggshop.com), where they’ve been turning out homemade fudge since 2011. Their fudge comes in unusual flavors like red velvet and dulce de leche and in seasonal varieties like apple pie and candy cane. And, of course, in good old chocolate.