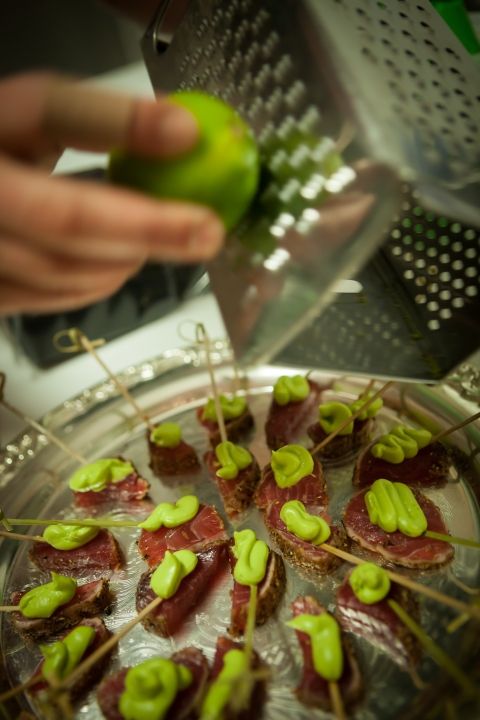 With Woodstock still reeling from the closure of beloved Mexican restaurant Gypsy Wolf Cantina in December, it’s a good time for the Ulster County town to have something of a restaurant boom. Two new restaurants have opened in Woodstock this winter, both aiming to serve comfort food made with local, seasonal ingredients.

On Dec. 4, Shindig opened for business in a tiny storefront right in front of the town square. The location couldn’t be better: through the restaurant’s plate-glass windows, you can watch the regular Sunday drum circle and keep an eye on the arrival of the Trailways bus all at the same time.

Above: Tinker Tots at Shindig. Photo via the Shindig Facebook page.

Chef Page Moll presides over blackboard menu featuring seasonal specials made with local ingredients and a beverage list that features craft beer, “off-the-beaten-path wines,” and specialty cocktails made with soju, Korea’s most popular kind of alcohol.

Breakfast, lunch and dinner are available, with prices ranging from $4 for a side of mac and cheese to $11 for a Shindig burger. The place is open 9 a.m. to 9 p.m. every day except Tuesday.

A mile down Tinker Street in Bearsville, a new bar hopes to turn a long-vacant building in the heart of the hamlet’s restaurant-and-arts complex into a public living room.

The Commune Saloon, which had its soft launch on Feb. 6, is located across from the high-end Bear Café in the Petersen House, an eccentric structure in the heart of a 15-acre commercial compound created by Albert Grossman, Bob Dylan’s manager, in the 1970s. The complex is also home to the Bearsville Theater, Radio Woodstock WDST 100.1 FM and the Little Bear Chinese restaurant.

The night of the opening, Michael Roark, one of Commune Salooon’s owners, mingled with a lively crowd while holding a drill in one hand.

“It’s a fantastic complex,” Roark said. “There needed to be a lower-priced alternative to the fine dining available here, at a lower price point. This was an amazing place that Albert Grossman created, and we feel that we’re carrying on his legacy.”

Petersen House has been a bit of a conundrum for would-be restaurateurs. It’s not totally obvious where the front door is. The structure is a mishmash of oblong rooms, one with stained glass windows emblazoned with Gothic letters that spell out “Bear.”

Roark and his partners, food industry veteran Nicolas Geeraerts, John Kirkpatrick and Chef Michael Hamilton, have tackled the odd space with panache. A pool table gets a place of honor under a cathedral ceiling, and cozy booths line a hallway next a tiny courtyard that houses a huge tree, growing right in the center of the building. Outside, a large stone-paved courtyard houses a new fire pit, which will keep merrily burning year-round.

Inside, the bar gleams with shiny polished metal fittings under an array of antique-style bulbs. Craft cocktails and beers are heavy on local brewers and distillers. Kingston’s Keegan Ales Old Capital is on draft, and spirits from Bethel’s Catskill Distilling Company and Roscoe’s Prohibition Distillery play starring roles in the mixed drinks. (Prohibition’s Bootlegger 21 gin is the main ingredient in Dylan’s Mess, a twist on a gin and tonic that nixes the tonic and adds cucumber and basil instead.)

The food is aimed at nibblers, with small plates that are often locally sourced and priced between $8 and $12. The dishes have been created by Chef Michael Hamilton, who has worked in deluxe restaurants in the Hamptons and in NYC (including under the feared Gordon Ramsay of “Hell’s Kitchen” fame).

A standout is the buttermilk fried chicken sandwich ($10), which is deliciously flaky and crunchy and comes garnished with spicy Sriracha and cool coleslaw. On opening night, it arrived in slider form as a hot, tasty little sandwich.

Catskills towns can go decades without seeing any new restaurants open, so this sudden rush of eatery-launching is worth celebrating. Get thee to Woodstock, folks.