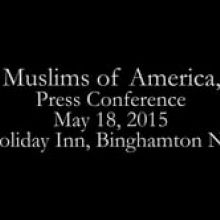 Above: Video taken at a press conference held in Binghamton on Monday by the Muslims of America, residents of the Tompkins community of Islamberg. Video shot and edited by Jessica Vecchione of Vecc Videography.

From February to April of this year, Robert R. Doggart, a 63-year-old Tennessee man who ran for U.S. Congress in 2014, was hatching an elaborate plan to massacre the inhabitants of Islamberg, a Muslim community in the Catskills mountains of New York, according to the FBI and federal prosecutors.

Doggart was arrested on April 10, just before he was scheduled to travel to Islamberg, which is located in the Delaware County town of Tompkins, near the village of Hancock, to conduct reconnaissance for the attack, according to court documents.

Left: Robert R. Doggart in a campaign photograph, via Heavy.com.

Doggart has pled guilty to one of the charges, and is currently under house arrest in Tennessee while awaiting sentencing.

The details of Doggart’s plot became public last week, when documents in a federal court case filed in Tennessee against him were unsealed.

That's when residents of Islamberg discovered the details of the plot to kill them.

“You cannot imagine the level of disruption Mr. Doggart’s threat has caused the families of Islamberg,” said Tahirah Amatul-Wadud, a lawyer for Islamberg who is also a member the community, during a press conference held in Binghamton on Monday, May 18.

“One of the things that is extremely alarming is that some of the threat has come from so many miles away, and there is much that we are unaware of,” said Tahirah H. Clark, another of Islamberg’s lawyers and members. “To explain the level of alarm that the community is facing right now — it’s pretty bad.”

Islamberg is the worldwide headquarters of The Muslims of America, an American religious Muslim organization that has satellite communities in other locations in the U.S., including York, South Carolina; Red House, Virginia; Dover, Tennessee; and Jesup, Georgia; and Commerce, Georgia, according to a fact sheet issued by the organization.

Above: Tahirah Clark, left, and Tahirah Amatul-Wadud speak to reporters in Binghamton on May 18. Both women are lawyers representing The Muslims of America and are members of the Islamberg community.

The Tompkins community of Islamberg has existed for decades. Founded in 1980, it is home to about 200 adults and children, most of them African American Sunni Muslims, said Khadijah Smith, the Assistant Chief Executive Officer for The Muslims of America.

Within the community, women wear head scarves and many men wear skull caps. The community has its own mosque and school, and is located on a private rural road behind a gate that is now often kept closed because of security concerns.

The Muslims of America communities have fought repeated claims by several organizations --  the Christian Action Network and The Clarian Project -- that they are terrorists plotting jihad. Those accusations have repeatedly circulated on Fox News.

Delaware County Undersheriff Craig DuMond said today that Islamberg has been monitored by the FBI for decades, and that the complaints about terrorist activity there have never been substantiated.

“We’ve been [to Islamberg] to assist fire departments, EMS and basic county agencies,” DuMond said. “They’ve never given us any trouble. They’ve always been very cooperative. We’ve had decades of them being there, and there’s never been anything that brings any credibility to the accusations that are being made.”

The Muslims of America have tried to combat the accusations, which they attribute to "Islamophobia," by filing a defamation case against the Christian Action Network. That case was dismissed on technical grounds in 2014, but The Muslims of America leaders said today they are pursuing a modified version of the case.

Meanwhile, Islamberg itself has been the target of threatening messages and visitors, its leaders say. In 2013, two men in a vehicle carrying “strange equipment” visited the property, and quickly fled when they encountered residents. On April 22, 2015, Islamberg received a death threat in a letter, Amatul-Wadud said.

Above: An image of Islamberg children released by Islamberg and The Muslims of America on May 16, 2015.

The threats seem to be coming from outside the Catskills. Within the region, residents of Islamberg feel like valued members of the community, they said at today’s press conference.

“If you go to our neighbors and those in the Deposit and Hancock areas, they’ll tell you who we are,” said Hussein Adams, the CEO of The Muslims of America. “They’ve been there. They don’t like it when outsiders come in and tell the story.”

“We’re tried to build good, strong, warm relationships with our neighbors,” Amatul-Wadud said. Many Islamberg adults work in Delaware County and in Binghamton, and their children participate in local sports programs and in community events, she said.

“Our neighbors, the locals, they recognize who the outsiders are, and they do not like it,” she said. “We’ve tried to establish close relationships with those individuals, so that if and when they’re approached, they’ll go to the FBI and law enforcement. We believe that they will look out for us, they will protect us.”

On Monday, May 18, upon hearing of Doggart’s plot, one of Islamberg’s neighbors, a white woman, “draped herself in a scarf and said she would stand with us,” Amatul-Wadud said. “That put a smile on our faces.”

“We will cut them to shreds”

The FBI, which has a long relationship with Islamberg, became aware of Doggart’s plot in February, according to court documents.

With the help of wiretaps and a confidential informant posing as a fellow plotter, the FBI caught Doggart in the act of recruiting members of “private militias” to his plan to murder the residents of Islamberg with rifles and machetes and to burn down the community’s mosque, school and cafeteria with Molotov cocktails.

Doggart “took numerous steps” to plan his attack, prosecutors say. He travelled to Nashville and to Greenville, South Carolina to recruit fellow members of a militia, and tried to recruit “expert gunners” to join his “operation” against Islamberg. In Nashville on March 17 with the FBI’s informant, Doggart showed off an M-4 rifle and a map of Islamberg, where he indicated which buildings he wanted to burn down.

In a wiretapped phone conversation, Doggart discussed his plans to destroy the community in detail, according to court documents:

“When we meet with this state, the people that we seek will know who we are. We will be cruel to them. And we will burn down their buildings … and if anybody attempts to harm us in any way, our standoff gunner will take them down from 350 yards away. The standoff gunner would be me … We’re gonna be carrying an M4 with 500 rounds of ammunition, light armor piercing. A pistol with three extra magazines and a machete. And if it gets down to the machete, we will cut them to shreds … I actually think we can get in and out of there without getting caught. There’s only four policemen in town. The fire department is a volunteer department, so it’ll take them 35 minutes to get there while that building will be burned down already. And we’ll be long gone by then.”

At a press conference held on Monday, May 18 in Binghamton, Hussein Adams, the CEO of The Muslims of America, called for hate crime and terrorism charges to be filed against Doggart.

“We ask the court to revisit the charges, to include the term ‘hate crime” and the word that they’d like to stay away from: ‘terrorism,'” Adams said.

Amatul-Wadud, one of Islamberg’s lawyers, said that if Doggart were a Muslim, he would be facing stiffer penalties.

“We acknowledge that there is a double standard,” she said. “We believe that any person that purports to be Muslim who behaves in a way that is inconsistent with the laws would be charged with terrorism.”

In April, Doggart was arrested on three felony charges: for soliciting others to violate civil rights laws; for attempting to destroy religious property because of the religious character of that property; and for making interstate threats.

But a plea agreement worked out between prosecutors and Doggart’s lawyers drops two of those charges and leaves only the interstate threat charge, which comes with a maximum sentence of five years in prison and a $250,000 fine.

Doggart is now awaiting sentencing. In the meantime, he has been released from prison and is being held under house arrest.

The FBI and federal prosecutors are actively investigating Doggart’s co-conspirators, according to Amatul-Wadud.

Until others are arrested, Islamberg’s residents don’t know whether other gunmen might be heading to Tompkins.

“At this point, we don’t know,” Amatul-Wadud said. “We are staying alert, staying aware, and we are reporting all suspicious activity to local law enforcement.”

Correction: Islamberg is located in the Delaware County town of Tompkins, not the town of Hancock.