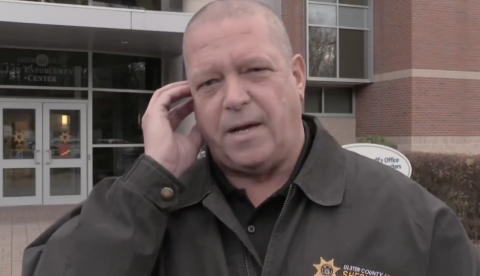 Paul Van Blarcum, the Sheriff of Ulster County, ignited a furor in the Catskills and in the national media on Thursday in when he posted a plea on Facebook asking licensed gun owners to carry their weapons with them at all times in case they encounter a mass shooting like the one that killed 14 people in San Bernardino, California on Wednesday, Dec. 2.

“I want to encourage citizens of Ulster County who are licensed to carry a firearm to PLEASE DO SO,” Van Blarcum wrote in a post that he also sent to local media outlets as a letter to the editor. “We are the thin blue line that is entrusted in keeping this country safe, and we must be prepared to act at any given moment.”

The Facebook post immediately went viral. Since its publication at 11:14 a.m. yesterday, it has been shared almost 30,000 times. By yesterday evening, hundreds of news articles around the country had covered the story, putting Van Blarcum in the center of a national debate about the proper role of civilians in an era of mass shootings.

In the Catskills, Van Blarcum’s call to arms has inspired a wide range of passionate responses from elected officials, fellow sheriffs in neighboring counties and residents. Within hours, a petition on Change.org had gathered hundreds signatures opposing the sheriff’s statement.

But 72 percent of over 1,000 people taking an informal poll on the site of one of the local newspapers, the Times Herald-Record, supported the sheriff’s statement.

Ulster County Legislator Ken Wishnick penned a letter on Facebook saying, “I believe that encouraging ALL license holders to carry their weapons at all times is both misguided and scary,” according to the Daily Freeman.

“I am not convinced more guns in the hands of untrained or unskilled civilians is the answer and nor do I believe does the Sheriff. I discourage anyone from misreading the Sheriff’s comments,” Carnright wrote in a statement on his blog.

Ulster County Executive Mike Hein, who is reportedly mulling a run for U.S. Congress, was conspicuously silent on the topic, according to the Poughkeepsie Journal:

Ulster County Executive Mike Hein did not respond to repeated requests for comment on whether or not he supports the sheriff’s posted statement.

“The police cannot be everywhere,” Schiff wrote in a press release. “The second amendment and the laws of New York State give citizens the tools to defend themselves and their families from harm, until law enforcement can arrive on the scene.  Given the recent attacks in our country and abroad, citizens should be aware of their surroundings, exercise vigilance and not be afraid to report any suspicious activity.”

Orange County Sheriff Carl DuBois said he's been encouraging off-duty deputies for months to carry their weapons in light of mass shooting events. But he stopped short of encouraging all Orange County citizens with pistol permits to start arming in the streets.

"He's basically telling people who have no professional training in combating suspects or stopping lethal threats to carry weapons and take actions they may not even be capable of," Bethencourt said.

Van Blarcum takes to the media

Van Blarcum has given interviews to a dizzying array of media outlets, both local and national, in the past 24 hours.

He told the Woodstock Times that the media attention has been “crazy:"

“I had one place offer to send a car up for me to go to New York City,” said Van Blarcum. “I’m a low-key guy, I have no desire to go down there and be on TV. If they send someone up here I’ll talk to them.”

In all his interviews, Van Blarcum says that he stands by his statement that civilians who have been trained and licensed to carry guns should do so at all times.

To the Wall Street Journal:

“If s— hit the fan, I would rather have somebody there with a weapon,” he said. “I’d rather be able to defend myself.”

Sheriff Van Blarcum added that he didn’t think his post would create such a contentious debate.

“I was doing this from my heart,” he said. “I was really heartbroken by what is happening around the world and this thing in California, and I felt like I wasn’t doing enough to encourage people to be armed, and be respectful and responsible about that.”

According to the Woodstock Times, Van Blarcum’s firsthand experience with mass shootings played into his decision to ask armed civilians for help:

Van Blarcum said that his thinking on the subject was influenced in part by his experience with the Hudson Valley Mall shooting. On Feb. 13, 2005, Robert Bonelli walked into the Town of Ulster shopping center and opened fire with an assault rifle, wounding two people. Van Blarcum said there were six off duty cops in the mall at the time of Bonelli’s rampage, but none was carrying a weapon.

In an interview on Fox News, Van Blarcum, who is a Democrat, was adamant that he is “not trying to form a posse or any kind of vigilante action." He pointed out that there are already 10,000 gun permits issued in Ulster County.

“There’s people out there carrying guns,” he said. “We have 10,000 permits out on the street,” he said. “I’m not telling anybody to go out and get armed.”

Talking to the Associated Press, Van Blarcum said that he has received more positive comments than negative ones.

“[B]ut the negative ones are very adamant," he said. "I respect the people who disagree with me. As a licensed handgun owner, you make the decision whether you want to carry it or not. It's a personal decision."

The sheriff’s post inspired a protest that was scheduled for 4 p.m. on Friday, Dec. 4 outside Ulster County’s Law Enforcement Center in Kingson, according to the Woodstock Times.