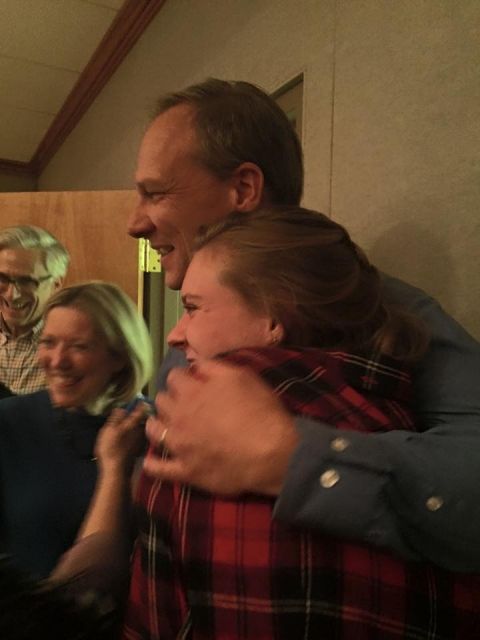 Above: Gary Rosa celebrates his election to the position of Delaware County Family Court Judge. Photo via the Vote for Gary Rosa Facebook page.

Gary Rosa has won a heated race for Delaware County's new family court judge position over county attorney Porter Kirkwood 5,150 to 4,662, according to unofficial election night results published by the Delaware County Board of Elections on Nov. 3, 2015.

The contest was the county's most high-profile race this election season. It pitted Rosa, a Democrat who narrowly lost an election for county judge in 2012, against Kirkwood, a Republican candidate who received a slew of endorsements from prominent Republican officials and lawmakers and whose campaign was managed by a political strategist from Binghamton.

Determined not to lose another countywide judicial race, Rosa came out swinging early in his campaign with a blistering critique of Kirkwood. He also criticized Delaware County's governance as a whole, which has been the subject of several critical reports by the New York State Comptroller this year.

The strategy appears to have worked: Despite Kirkwood's advantage as the candidate of the county's established Republican party, Rosa won tonight by 488 votes, a healthy margin.

Around 11 p.m., Rosa told the Daily Star that Kirkwood had conceded the race. He then posted a victory photo and statement on his Facebook campaign page: