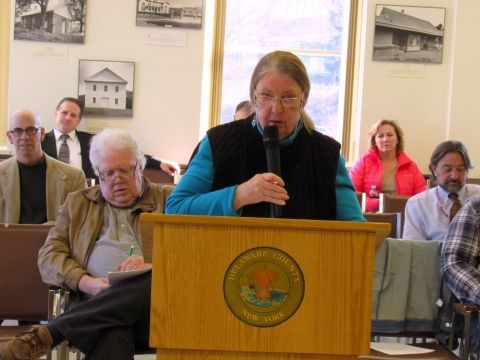 Above: Maureen Wacha of Walton, a motel owner, spoke against the Delaware County bed tax at a public hearing on Tuesday, Nov. 24. Photo by Robert Cairns.

Those who pay for overnight stays at hotels, motels and other lodging establishments in Delaware County will soon pay two percent more.

The Delaware County Board of Supervisors, at a meeting on Tuesday, Nov. 24, approved a hotel and motel occupancy tax that will also apply to bed-and-breakfast establishments and rentals of vacation homes.

Under the provisions of the law, the tax’s proceeds are dedicated to tourism and will not go into the county's general fund.

The bed tax law came up for a vote last month, but was withdrawn after objections to language that would have limited it to establishments which provide amenities such as maid service.

That language was removed in the version of the bed tax law that passed yesterday, making the tax applicable to casual rentals such as those booked through services such as Airbnb or promoted through classified advertising websites such as Craigslist.

A public hearing on the earlier version of the law drew comment from only three people. Wednesday's public hearing drew only two, and one was a repeat commenter from the last round.

Maureen Wacha, the owner of a motel in Walton, called the tax “a tourist tax which is absolutely self-defeating.” She said that the tax “punishes” tourists who stay overnight, while those who make day trips to the county are not taxed.

Wacha said that “the only business that caters to tourists is the lodging business.”

“The motels are an easy target for taxation,” she said, adding that other businesses should pay an added tax, too. “It is grossly unfair and discriminatory,” she said.

The other speaker was Leland Ploutz, the owner of a motel in Hamden, who had spoken at the public hearing in October.

Ploutz called the bed tax “unnecessary and a wrong way of going.” He said that Delaware County does not have as many tourists as neighboring counties and that the county should focus on fixing roads instead of tourism.

He also said that other businesses that cater to tourists should pay more as well.

“I don't think this is fair,” Ploutz said. “It should be taxed all across.”

During the board's discussion on the local law, several supervisors said that their town boards had expressed opinions on the tax.

“The town I represent is split right down the middle,” said Hamden Supervisor Wayne Marshfield. “Two for and two against.”

He acknowledged opposition to the bed tax, saying, “Some in our lodging industry say that we're picking on them and no one else.”

Marshfield rejected the idea of raising taxes on other businesses, though, saying that such taxes would have more impact on local residents than on tourists.

Marshfield also rejected the idea that reporting the tax places a burden on innkeepers, saying he had seen a sample bed tax reporting form.

He said that the revenue from the tax “will make a more even playing field with our neighboring counties,” and that increased advertising will increase occupancy rates for lodging businesses.

Marshfield added that an additional $3 on a $150 hotel bill would not likely keep people away and that an increase in sales tax generated on other purchases by tourists “will reduce, ever so slightly, the need for increased property tax.” Davenport Supervisor Dennis Valente, who has opposed the tax since it was proposed in 2014, said that owners of inns do not need more administrative work to do.

“I'd have to be overwhelmed by the benefits to take on another reporting requirement,” he said.

Andes Supervisor Martin Donnelly spoke in favor of the tax.

“I think that it's fair for the county because it's not a tax on our people,” he said. “We're the ones hanging out in left field, losing this revenue that could be helping our people.”

Colchester Supervisor Art Merrill said that his entire town board opposes the tax.

“It's inequitable,” he said. “I think it's a way we look to get easy money and I don't think it'll be used to support the businesses it's supposed to benefit.”

Delhi Supervisor Mark Tuthill said that he supported the tax.

“I have my doubts that this is going to solve all our problems, but if we're going to be here in 20 years, we need to do every little thing we can,” he said.

Walton Supervisor Bruce Dolph agreed. “We need to make a difference here,” he said. “I think this is in the best interest of our county and its future.”

Stamford Supervisor Mike Triolo listed several events and attractions in the area and said the county needs to do a better job of advertising them.

“All we advertise is to ourselves,” he said. “It's like winking at a girl in the dark. You know you did it. She doesn't.”

Franklin Supervisor Jeff Taggart agreed. “We don't put a lot of money into an advertising fund for pushing the county,” he said.

Harpersfield Supervisor and board Chairman James Eisel said that there had been questions about how much revenue the tax would generate, but that the numbers were confirmed based on existing sales tax numbers.

“My concern was always that it's not our local taxpayers,” Eisel said.

At the end of the discussion, the supervisors voted to approve the law, with Merrill, Valente, Bovina Supervisor Tina Molè, Deposit Supervisor Tom Axtell and Kortright Supervisor George Haynes opposed.

Under the board's weighted voting system, based on the populations of the towns, the tax was approved by 3,570 votes to 907.

Prior to Tuesday’s vote, Delaware County was one of only three counties in the state without a bed tax. Chenango and Greene counties do not impose a bed tax.