With 121 eminent domain cases filed, another round of hearings for Constitution Pipeline 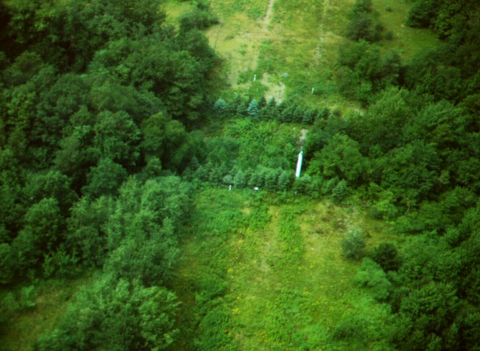 Above: An underground natural gas pipeline right-of-way after completion. Photo courtesy of FERC.

The New York State Department of Environmental Conservation (DEC) is holding public hearings on whether or not to issue a permit to the Constitution Pipeline, a natural gas pipeline that seeks to break ground through Delaware, Schoharie, Broome and Chenango counties this year. The agency has also extended its public comment period on the pipeline until Feb. 27, 2015.

Since then, it has been moving aggressively to force reluctant landowners along the 124-mile route to cooperate. The pipeline has filed 121 eminent domain lawsuits against property owners along the route who don't want the pipeline to cross their land.

About 81 percent of the 625 landowners along the route have signed easements with the pipeline company, while 19 percent have not, according to Constitution spokesman Chris Stockton.

But the DEC still must issue a permit to the pipeline before construction can begin. That gives the public another chance to weigh in.

The DEC is hosting three public hearings this week. They are in Binghamton on Monday, Jan. 12; in Oneonta on Tuesday, Jan. 13; and in Cobleskill on Wednesday, Jan. 14. Details about times and dates are below.

There are other obstacles in the pipeline’s way.

The Pace Environmental Litigation Clinic, on behalf of anti-pipeline group Stop the Pipeline, has filed a request for rehearing with FERC, arguing that the federal agency violated several federal laws, including the Clean Water Act, when it gave the pipeline the green light last year.

If FERC doesn’t grant a rehearing on the pipeline by Feb. 2, Pace will likely file a lawsuit in court to intervene.

Pace’s argument is that FERC jumped the gun when it gave the pipeline its permit before allowing the DEC to approve the project.

“According to the Clean Water Act, the DEC hearings and comment period were supposed to be held before FERC made its decision,” Anne Marie Garti, the Pace lawyer on the case, wrote in an email to the Watershed Post. “There is a Constitutional due process violation by doing it backwards.”

Constitution Pipeline officials do not agree.

“We believe the FERC’s evaluation of the Constitution Pipeline project was comprehensive and accurate in its ultimate assessment that the project is needed and that environmental impacts would be reduced to less than significant levels with the implementation of proposed mitigation measures by the company and FERC,” Stockton said in an email.

Some Catskills landowners are also complaining about the pipeline’s tactics.

The New York Attorney General has forwarded one citizen complaint to FERC in which a landowner asserts that pipeline agents have trespassed "many times" on his property without permission. FERC has posted the complaint on its website.

The DEC will be taking comments about the pipeline until Feb 27, 2015. Comments can be submitted to Stephen M. Tomasik, in the DEC’s Division of Environmental Permits, at 625 Broadway, 4th Floor, Albany, NY 12233-1750. Comments can also be emailed to dec.sm.constitution@dec.ny.gov.

Update 1/3/15: The DEC has extended its public comment period on the pipeline to Feb. 27. It sent an email about the decision on Jan. 12:

The New York State Department of Environmental Conservation (DEC) today extended the public comment period on the draft permit for the proposed, federally regulated Constitution Pipeline and an upgrade to the Iroquois Wright Compressor station in Schoharie County by an additional 28 days. Public comments on the propose project will now be accepted until close of business on Friday, February 27.