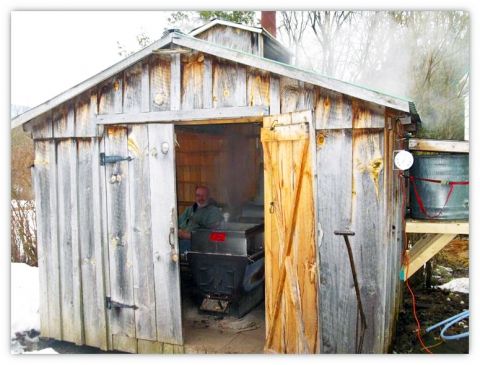 Above: A man and his evaporator: Mike Porter in his Margaretville sugar house. Photo courtesy of the Catskill Forest Association.

Warm during the day, and below freezing at night: It's the beginning of maple syrup season. Maple producers across the Catskills have spent the past few months laboriously tapping maple trees, and now it's time to gather the sap and boil it down to make syrup.

It takes anywhere from 40 to 50 gallons of sap to make a single gallon of maple syrup, so producers are about to spend the rest of the month next to their evaporators.

The season gets into full swing on March 22 when producers across the state open their sugar houses during Maple Weekend. (Stay tuned for our guide to maple weekend, coming out next week.)

But if you're desperate for a taste of the sweet stuff early, you can get a sneak preview of a working sugar house at a Catskill Forest Association workshop in Margaretville this Saturday.

Maple producer Mike Porter has a small sugar house right in his backyard in the village, and it will be open to the public on March 15.

Porter's sugar operation is tiny compared to some of the larger Catskills maple producers, according to the CFA"s Ryan Trapani, who wrote an article about the history of syrup-making in the Catskills in the CFA's sponsored "From the Forest" section:

In the 1920s the average producer in Delaware County made approximately 25 gallons from 50 to 100 taps. Today, it is not uncommon for a large commercial producer to make between 250 to 1,000 gallons from 1,000 to 5,000 taps where tens of thousands of dollars are invested in the operation.

To read more of Trapani's article, which is an encyclopedic introduction to sugar maple and maple syrup, click here.