Stamford rallies around family who lost everything to fire 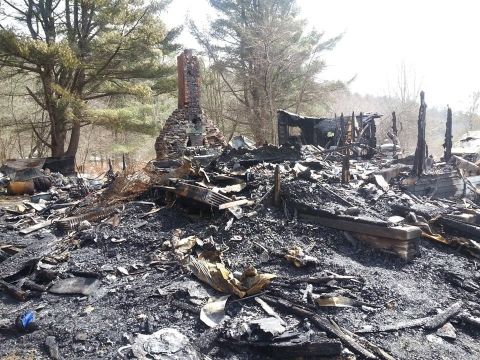 Above: Where the Mattice home stood on River Street in Stamford, only the chimney is left standing. Photo by Nick Mattice.

As Nick Mattice jumped from the second story of the home he’d live in his whole life, the only thing running through his head was: Get down and put out the fire.

At around 7:50 p.m. on March 18, Mattice, 24, awoke from a nap to a smell like a burnt candle. The hallway outside his room was filled with smoke. When he ran downstairs and opened the kitchen door, flames burst out at him.

His sister Sarah ran inside and let their four dogs out. Their father Charles went in and pulled her out after. When the fire started, they were in their freestanding garage away from the house.

Once Nick was on the ground, he broke into a side door and got a fire extinguisher, which didn’t work. Desperate, he threw snow at the fire.

Within five minutes, the fire roared out of the house.

The fire department is still investigating the cause of the fire that reduced the Mattice home to rubble, but they have determined that it was an electrical problem, possibly having to do with a faulty power strip. Firefighters said fire may have begun in the basement.

About 45 firefighters arrived on the scene, but within 10 to 15 minutes, it was fully involved. The home that the Mattice family had lived in for three generations was lost.

To make matters worse, the house was not insured.

“It’s an old house and it’s paid off, and you always think ‘It’s never going to happen to me,’” Mattice said. “How quickly they go — old homes that are made of wood. It’s made me and the people I’ve spoken to really take that and think of the importance of having insurance. It’s so cheap to have on there.”

For now, Nick is spending all of his free time clearing off the property where his house used to stand. Nick, his sister and mother Rosemarie are all working full time, but his father is disabled and unable to work.

“With not having the insurance, everything is a total loss,” Nick said. “We really are starting from scratch.”

Mattice said it’s been harder on his parents than on him.

“It’s just stuff to me, but it’s 50-plus years for my mom of living there,” Mattice said.

Rosemarie and her eight siblings grew up in the house. Her mother hosted Sunday school groups there. Her father’s Purple Heart medal was lost in the blaze.

The family is staying at family member’s summer house on top of Mt. Utsayantha until they find something more permanent.

“We’ve had people look for places around the town for us to buy,” Mattice said. “It’s been phenomenal. People are really trying to band together.”

The Sacred Heart Catholic church in Stamford has donated $5,000 to the family.

At the suggestion of Mattice’s girlfriend, Danielle Russo, the family has set up a gofundme.com fundraiser, which allows anyone to contribute as little as a dollar, or as much as they want.

Andrew Hauser, a former classmate of Mattice’s who lives in New York City, chipped in $1,000 of his own savings, though Mattice said he hadn’t seen him in years.

As of press time, the family has raised $1,920 toward their goal of $10,000. Donors can also contribute through NBT Bank by bringing cash or check to a local branch, which will deposit the money directly into an account for the family.

The Stamford Fire Department is hosting a benefit lunch on Saturday, April 26, from 11 a.m. to 1:30 p.m. at their Main Street firehouse, to raise funds for the Mattices. Proceeds from the sale of chicken BBQ and ribs will go to the family's fund.

Mattice asked that anyone seeking more information on any of these efforts contact his girlfriend Danielle Russo at dani.lynn13@hotmail.com.

This weekend: Foodstock at the Villa Roma

Fund set up for family of shooting victim Aron Thomas

Woodstock rallies for Garden Café On The Green owner