A side of maple syrup, please 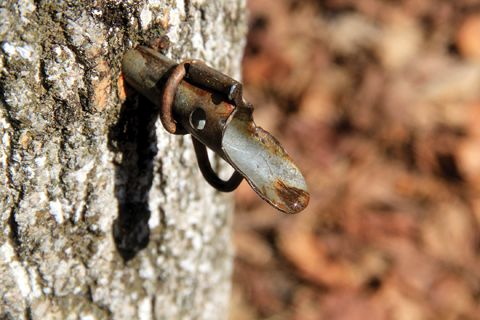 Above: Photo by Bob Roney, courtesy of Willderhook Maple, Middleburgh.

Move over, Vermont: New York State produces almost a fifth of the nation’s maple syrup, and much of that comes from the Catskills, where dairy farmers looking to make a little extra income often have found it in their sugar bushes.

The mountains are home to many sugarhouses, from large operations with state-of-the-art syrup evaporators that use reverse osmosis to little shacks that still employ the old-fashioned boiling method.

Maple syrup is available all year long, but the tapping season lasts for just a brief few weeks in March, when frosty nights and warm, sunny days kickstart the sap moving. The best way to watch a sugarhouse in action is to visit one during Maple Weekend (actually two consecutive weekends), when special farm visits, syrupmaking demonstrations and pancake breakfasts abound throughout the Catskills. In 2014, the dates are March 22-23 and 29-30; see mapleweekend.com for a full schedule and list of producers.

A FEW FACTS TO BOOST YOUR MAPLE IQ:

GRADE A ISN'T NECESSARILY THE BEST:
Maple syrup grading is a holdover from Colonial times, when blandness was considered an asset. The highest grade, Grade A light amber, is the syrup closest in flavor to plain white sugar. If it’s intense maple flavor you’re after, look for dark, rich Grade B.

WHAT'S WITH THE TUBES?
In early March, blue plastic tubing snaking through trees is a common sight along Catskills roadsides. While it’s not as cute as buckets, the tubing saves work for the syrupmaker by collecting sap from many trees at once. Some syrupmakers install vacuum pumps on their lines to draw more sap.

WHY IS SYRUP SO EXPENSIVE?
No doubt about it, genuine maple syrup, which bears little resemblance to the saccharine stuff in the Aunt Jemima bottle, is pricey. It’s not uncommon for local restaurants to charge an extra dollar or two for a shot of the real thing to go with your pancakes. Consider that it takes about 40 gallons of painstakingly collected sap to make just one gallon of syrup, and it’s not hard to see why it’s a valuable commodity.

This article originally appeared in the print version of the 2014 Catskills Food Guide, our annual publication covering local farms, restaurants and food purveyors. Find a copy near you here