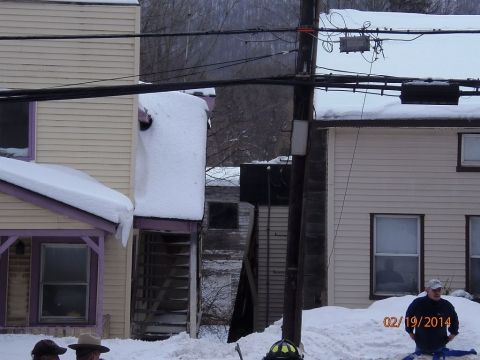 Above: The scene of a propane explosion in the village of Stamford, taken around 12:30 p.m. on Wednesday. Damage can be seen on the side wall of the house on the right, 59 Main Street, where the explosion occurred. Photo by Michael Martin.

A propane explosion in the village of Stamford left a Main Street house heavily damaged, displaced six residents, and shut down Route 23/Main Street in the area for several hours on Wednesday, Feb. 19.

The Stamford Fire Department got a call at 11:46 a.m. about an explosion at 59 Main Street, first assistant fire chief Don Van Etten told the Watershed Post. When the firefighters arrived a few minutes later, smoke was billowing from the house.

Two of the building's six tenants were home at the time of the explosion, Van Etten said. There were no injuries.

"Two tenants advised me that the building had a major explosion," he said. "There was a minimal amount of fire. We had the fire knocked down very quickly. It was more the damage -- two exterior walls were blown right off the foundation."

The house, owned by landlord Tony Dianich, had four apartments in it, and was home to six tenants. The Red Cross is helping the residents, Van Etten said.

"The landlord was present, and very concerned about the tenants' safety and getting them all the resources they need," he said.

The explosion occurred when leaking propane ignited, Van Etten said, but the cause of the leak and the source of the ignition are still under investigation.

Delaware County and Stamford village code enforcement officers were on the scene Wednesday, and will decide soon whether the building will have to be condemned, Van Etten said.

Responding to the scene along with the Stamford Fire Department were state troopers and Delaware County sheriff's deputies. Fire departments from Hobart and Grand Gorge were called for mutual aid, and were on standby.

Below: Stamford firefighters on the scene of the explosion. Photo by Michael Martin. 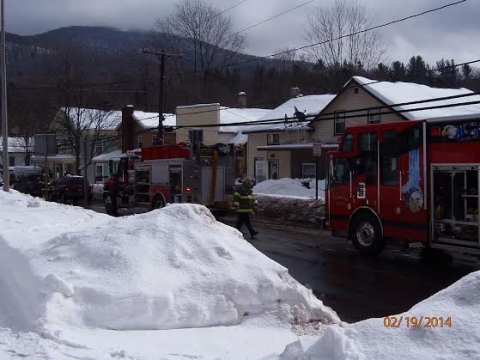