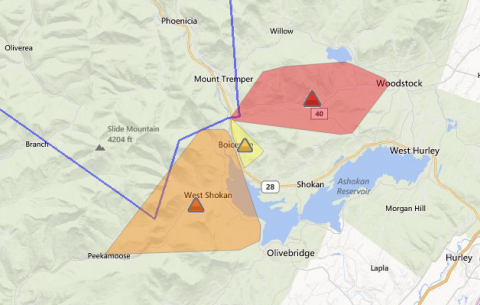 Above: Screenshot from Central Hudson's outage map showing widespread power outages in the Ulster County towns of Woodstock and Olive.

On Tuesday evening, with temperatures in the single digits and subzero wind chills, Central Hudson was reporting widespread power outages in the Ulster County towns of Woodstock and Olive.

According to the Central Hudson website, the Woodstock and Olive outages were expected to be resolved by 11:30 p.m. No restoration time was listed for the Hurley or Denning outages.

Some outages also occurred in the area early Tuesday morning and throughout the day, according to reports on social media. Information on the cause of the outages was not immediately available.

On Tuesday afternoon, the New York Independent System Operator -- the nonprofit company that manages and monitors New York State's complex electrical power system -- warned that unusually high demand for electricity was putting stress on the grid, and called on energy customers to conserve power between 4 and 10 p.m.

Last Saturday, over 4,000 NYSEG customers in rural Delaware County lost power for a few hours during a bitterly cold night after a substation transformer malfunctioned.

Update, 11:27 p.m.: Central Hudson has now pushed back its estimated restoration time for the Olive and Woodstock outages to 1 a.m.

Update, Thursday, 11:25 a.m.: Central Hudson spokesperson John Maserjian told the Watershed Post that the outage was caused by downed wires on Tinker Street in Woodstock, and worsened by a damaged substation component. For some, the outage lasted nearly 12 hours. Maserjian's statement:

The outage on Tuesday night was caused by fallen wires on Tinker Street in Woodstock, reported at 7:45 p.m., caused by high winds and falling limbs. In total, about 2,600 were affected in Woodstock, Olive and Hurley. Exacerbating the problem was a damaged component in the substation on Route 375; crews repaired the component and fallen wires by 10 p.m., and began restoring service in sections throughout the night. Power restoration is complicated by extreme cold weather, as power loads are high and restoration must be performed in phases to prevent overloading of electrical circuits and components. Restoration was completed by 7 a.m. Wednesday morning.