NWS: Tornado touched down in Parksville on Sunday 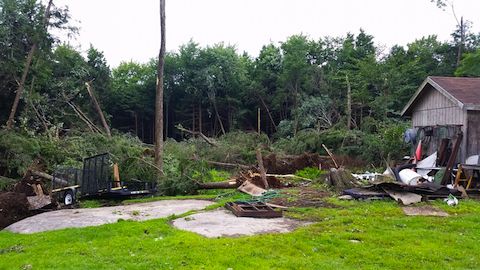 A fierce storm that blew through the tiny Sullivan County hamlet of Parksville on Sunday, July 13 has been determined to be a tornado, National Weather Service meteorologists say.

A team from the NWS's Binghamton office, whose territory includes Sullivan County along with 23 other counties in central New York and northeastern Pennsylvania, visited the site of the storm in Parksville on Tuesday to survey the damage. The team found severe tree damage in a small area around two homes, although the homes themselves had only minor damage from the storm. No one was injured during the storm.

Dave Nicosia, a warning meteorologist for NWS Binghamton, said that trained surveyors can tell from the pattern of tree damage whether a storm was a tornado or a "microburst" -- another kind of intense storm that strikes in a small area, but does not spin.

The rotation of the winds in a tornado can be seen in the pattern of snapped trees and splintered wood, Nicosia said.

"You can see the swirling motion in the tree damage," he said. "Plus, tornadoes tend to be narrow in width."

With Parksville's storm categorized as a tornado, the NWS Binghamton office has now confirmed eight tornadoes in their 24-county area in the span of a week. That's unusually high, but not unheard of, Nicosia said.

"Every three to five years, we get a few tornadoes. New York State averages ten tornadoes a year," he said.

In upstate New York, the tornadoes tend to be lower in intensity than storms in the more tornado-prone Midwest, Nicosia said. But because of our heavily forested landscape, a lower-level storm can do more damage here.

"Because we have significant tree cover, that kind of wind does significant damage to trees, which magnifies the damage to infrastructure -- wires down, roads blocked, cars crushed, houses damaged," he said. "If there's no tree cover, and you're in your house, you're going to lose some shingles, maybe a little bit of your roof, but you're going to be fine. But if a tree just comes crashing down on your house, and you don't have a basement, you're probably not going to fare well."

The rise of social media has been a boon to NWS forecasters in recent years, Nicosia said. The NWS Binghamton office's Facebook page currently has over 50,000 followers, making it one of the most widely followed NWS pages in the nation, despite their rural coverage area. During severe weather, citizens will act as amateur weather spotters, sending valuable field reports, photos and video of conditions on the ground to NWS forecasters.

"It's been extraordinarily helpful," Nicosia said. "It gives us situational awareness of what's happening out there."

Below: Meteorologists Erik Haden and Chad Hecht from the NWS Binghamton office discuss the unusually high number of tornadoes spotted in the local area recently.