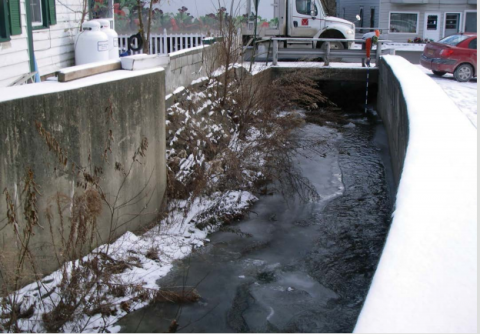 Above: Photo of the Bull Run culvert passing under Main Street in Margaretville, the site of a proposed flood mitigation project that may be carried out with funds from the NY Rising program. Photo by Tetra Tech; from the Margaretville NY Rising Committee's Community Reconstruction Plan.

Two communities in Delaware County that were heavily damaged in the Irene and Lee floods -- the villages of Margaretville and Sidney -- have won $3 million bonus awards from Gov. Cuomo's NY Rising program, in a competition among flood-affected communities for state funding.

The competition, dubbed "NY Rising To The Top," was a bonus round of funding for the state's $600 million NY Rising program, in which towns, cities and villages hit by the Irene, Lee and Sandy storms received $3 million each to put toward rebuilding and the prevention of future flooding. For the competition, local NY Rising planning committees submitted their flood plans for a chance to win an additional $3 million in bonus funding in each of eight categories, on top of $3 million that had already been awarded to each community.

The awards were announced Wednesday, April 23, at a NY Rising conference hosted in Albany by Gov. Andrew Cuomo. Members of local NY Rising committees from around the state were in attendance. All of the committees recently submitted lists of potential flood resiliency projects to the state, and are awaiting word on which projects will be approved.

Sidney's additional $3 million award, which the town will share with other Southern Tier communities in Broome and Tioga counties, was given for the best regional collaboration. The Southern Tier communities worked together during the planning process, hosting a regional summit on flood resiliency and working on computer modeling and stream management in the Susquehanna River basin.

A major piece of Sidney's NY Rising plan, which was presented at the conference by committee members Dennis Porter and John Redente, is a 140-acre "greenplain," a flood-damaged section of the village that would be bought and preserved as a wetland, to help absorb floodwaters. Sidney also plans to create a new neighborhood by purchasing a large farm for development, and to help residents in flood-damaged areas relocate to less vulnerable parts of the village.

Redente told conference-goers that the greenplain would be capable of holding as much water, during a flood, as a swimming pool the size of a football field and 20 stories deep.

After repeated flooding, including getting hit by both Irene and Lee in 2011, the village of Sidney is beginning to realize that some parts of the village "simply cannot be protected," Redente said. The committee also envisions the greenplain being used for recreation.

In a speech at the conference, Cuomo praised the Sidney committee's vision of moving development out of the floodplain, saying that too often, communities think of wetlands as "wasted space."

"Mother Nature was trying to tell us something [through repeated floods]," Cuomo said. "That's her area."

Sidney's greenplain project and buyouts of flood-damaged homes in the village are on track to get an additional $28 million in federal funding through FEMA's Hazard Mitigation Grant Program.

Margaretville, a village of about 600 people on the eastern end of Delaware County, won the award for best community involvement in the planning process. During the months of planning, the village's NY Rising committee canvassed door-to-door, held surveys and public engagement events, and created a video with the Margaretville Central School documenting recovery efforts.

Margaretville NY Rising committee co-chair Carol O'Beirne, who was in Albany today for the conference, told the Watershed Post she was proud of the work the committee has been doing since last July, when Cuomo announced the list of 102 communities in the state that would receive NY Rising funds.

"Everybody worked diligently and did their part, and gave their time and expertise," O'Beirne said.

One of the key projects in Margaretville's NY Rising plan is a proposal to widen and expand the Bull Run culvert that runs through the middle of the village and under several streets, a roughly $1,500,000 project that would require the village to acquire some privately owned property alongside the culvert. O'Beirne said that engineers from Tetra Tech, the firm selected by the state to do hydrological modeling and help with the planning process, told the committee that the Bull Run culvert project would have a significant impact on future flooding.

"We have been told we could drop the flood level two feet by doing the Bull Run project," O'Beirne said.

But another project with the potential to have a greater impact on Main Street flooding -- relocating businesses and infrastructure in the area around the Bridge Street Bridge, where the Freshtown grocery store was heavily damaged during the Irene floods -- has been deemed too lengthy and expensive a project to submit to the state for NY Rising funds. Instead, the committee has asked for $200,000 to study the issue.

"We've got to have more time to take a look at the whole picture, and get the business owners involved," O'Beirne said.

Under the rules of the NY Rising program, no elected official could serve on the committees, which were made up mainly of local nonprofit and business leaders as well as a few appointed officials. For months, the committees have been meeting regularly to come up with lists of proposed projects to submit to the state for NY Rising funds.

To be approved by the state, each NY Rising project must meet strict criteria. The projects must be able to be completed within the $3 million budget, and within two years. They must be fully funded by NY Rising, or have other funds already in hand. And they must all meet federal criteria set forth by the U.S. Department of Housing and Urban Development's Community Development Block Grant Program, the source of the state-awarded NY Rising funds.

Because of the federal criteria, the local NY Rising committees have been told by state representatives that certain types of projects -- for instance, stream management projects that don't involve infrastructure -- are unlikely to be eligible for funding, even if they have an impact on flood prevention.

The combination of tight budgets, short timelines and strict federal funding criteria has forced local NY Rising committees to focus on "shovel-ready" projects that do not involve a lot of local controversy -- qualities that many worthy flood prevention projects don't share.

Some Catskills communities that were devastated by flooding have not been included in the program at all; for instance, the town of Middletown, which includes the village of Fleischmanns as well as Margaretville, and where Irene flood damage was widespread beyond Margaretville's borders.

State officials have acknowledged that the program is no silver bullet for solving the Catskills' rising flood problems.

"The limited funding we have is going to be completely inadequate to address the need you folks have in the Catskills," state Watershed Protection and Partnership Council chair William Harding told the Shandaken and Hardenburgh committees at a public NY Rising meeting in February. "We can make a start, and that's what we're here to do...We really need you to help us choose the most beneficial, biggest-bang-for-the-buck projects that are eligible, that we can fund."

On the other hand, O'Beirne said that the short deadlines mean the program will see results in the community soon.

"The goal is to move this quickly," she said. "When you see all of these communities struggling trying to build back, you understand why there was a necessity to do this fast. You can't wait three or four years to spend this money."

A full list of the communities that won NY Rising To The Top awards was announced in a press release on Gov. Cuomo's website.

For more details on all of the flood resiliency plans developed by the NY Rising communities, including Sidney and Margaretville, see the NY Rising Community Reconstruction Program website.