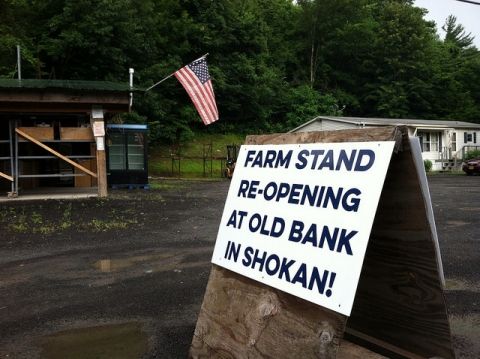 Hanover Farms, a Route 28 farmstand that has been embroiled in legal battle with the town of Shandaken since 2012, is looking for a fresh start -- a new town, and a new name.

Outside the shuttered farmstand, a new sign has appeared, announcing that the farmstand is re-opening at the "old bank" in Shokan. Eight miles east on Route 28, at the Shokan bank building that formerly housed a Bank of America branch, another sign has sprouted up: "Opening Soon: Greenheart Farmstand."

But the farmstand's announcement is unnerving officials in the town of Olive, who are hoping the business's father-and-son owners Al and Alfie Higley do things by the book this time.

"[Al] Higley was in yesterday to put in an application for a site plan. But there's no permission from the town of Olive for him to do anything at all," said Sylvia Rozzelle, supervisor of the town of Olive. "If he opens without a permit, that's not a good thing."

Hanover Farms, a large business that verged on being an outdoor grocery store, operated on a residential lot in Shandaken for a decade without any permit except one issued in 2004 for a 100-square-foot stand. In 2012, the farmstand sued the town when the local code enforcement officer issued a stop-work order to the farmstand. Last November, Hanover Farms was forced to shut down by a state judge, the resolution to both the farmstand's lawsuit against the town and a counter-suit filed by Shandaken against Hanover Farms.

Earlier this year, in an attempt to reopen the farmstand in Shandaken, Higley Sr. submitted a site plan to the Shandaken Planning Board and applied for several variances from the town's Zoning Board of Appeals -- the first time the farmstand had made any serious attempt to comply with local zoning law. In May, many local residents turned out to a Shandaken public hearing to voice their support for Hanover Farms.

But the Ulster County Planning Board advised town planners not to grant the variances. In a letter to the Shandaken ZBA, county planner Robert Liebowitz told town officials that some of the variances Hanover Farms was requesting could run afoul of the state Department of Transportation.

"The Ulster County Planning Board is concerned that several of the requested variances are likely to operate to the detriment of vehicular and pedestrian safety both along U.S. Route 28 and on site," Liebowitz wrote.

By the end of May, the fate of the farmstand was in limbo in a deadlocked ZBA, with no resolution in sight.

Rather than fight on in Shandaken, the Higleys have apparently decided to start over in Olive. On Thursday, Alfie Higley Jr. -- who is also a Shandaken town board member -- spoke to a reporter briefly in the parking lot of the bank building where he and his father plan to launch the new Greenheart Farmstand.

At first, the stand will operate out of a large tent outside the building, with indoor plans for the building to come later. The farmstand will be open soon, he said.

"It's going to be very shortly. Sometime in July," Higley Jr. said.

Higley Jr. said that he felt strongly about thanking the Shandaken residents who had supported Hanover Farms' bid to stay open in its old location.

"We want to thank all the people who have supported us over the years," he said.

Because the farmstand's new Olive location is also on state Route 28, Rozzelle said, there is a good chance the Higleys' plans will have to be approved by the Ulster County Planning Board -- and given the farmstand's scofflaw history in Shandaken, the agency is likely to go over the plans with a fine-toothed comb.

On the other hand, unlike Hanover Farms' Shandaken spot, the new location is zoned for business, which will mean looser restrictions on what can be done at the site.

The next meeting of the Olive Planning Board is scheduled for Tuesday, July 15. No decision can be made about the farmstand before that date.

If Greenheart Farmstand opens as planned, it will be something of a homecoming for Al Higley Sr., who opened Al's Supermarket in the town of Olive in 1978, in the spot that is now the Boiceville IGA.

Rozzelle said that when she first came to Olive, she used to work at the supermarket for Higley, in the late 70s and early 80s.

"Wonderful family. He's got a heart of gold," she said. "But he's got to get the proper permits."

Below: A small tent at the future home of Greenheart Farmstand in Shokan marks the site of what will be a much larger outdoor structure, if the owners' site plans are approved. Photo by Lissa Harris. 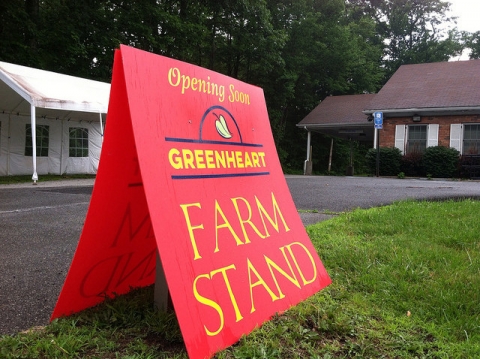