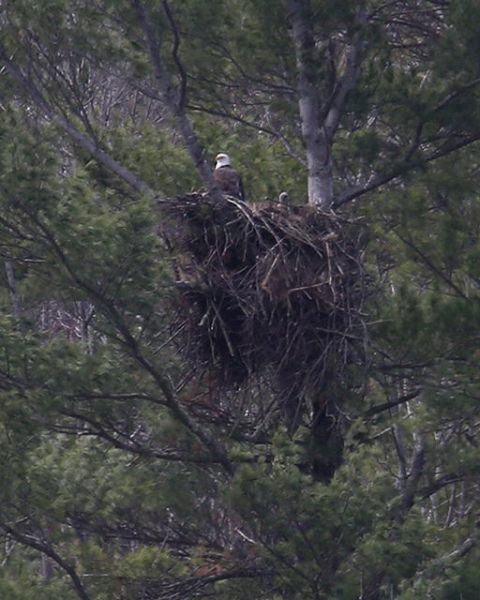 Above: An adult eagle and an eaglet in the bald eagle nest near the Gilboa Dam in Schoharie County. Photo via the NYC DEP's Flickr account.

For the second year running, a pair of bald eagles nesting near the Gilboa Dam has hatched a pair of fuzzy gray eaglets, according to a press release from the New York City Department of Environmental Protection, which runs the dam.

The eagles built the nest near the dam's west support wall -- an active construction zone in the midst of a $400 million rehabilitation project -- in 2011.  The couple didn't successfully hatch any offspring until 2013, when two eaglets successfully fledged and became favorites of the DEP staffers working nearby.

This year, last year's nestlings can be seen regularly fishing in Schoharie Creek. Their parents hatched another pair of eaglets in April, according to a DEP press release. The eaglets are still young -- they'll likely make their first flight in June.

The DEP is doing its best to make things welcoming for its avian neighbors. During the nesting season, vehicles and equipment within 330 feet of the nest are not allowed to honk or idle. DEP biologists monitor the nest for hours every week, and have installed aluminum flashing at the bottom of the nesting tree to discourage bears and raccoons from scaling the nest tree and harming the eaglets.

"The bald eagle nest at Gilboa Dam is unique because it shows that construction and conservation can take place side-by-side if the right precautions are taken," said DEP Commissioner Emily Lloyd in the press release. "I want to thank DEP’s construction workers and biologists for their extraordinary collaboration that has enabled us to keep the work on Gilboa Dam moving forward while protecting this nest. Everyone at the site has also taken an interest in the well-being of these beautiful eagles.