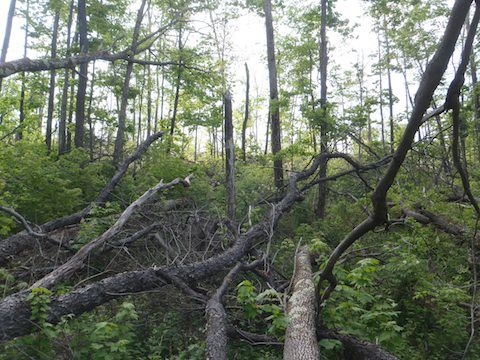 Above: Storm-felled trees on New York City-owned land on Houck Mountain, northeast of the Cannonsville Reservoir in Beerston, NY, in May of 2013. Photos courtesy of NYC DEP.

Blame it on the rain -- and the wind, and the torrential flooding. In the past several years, extreme storms have taken a toll on Catskills forests, leaving many trees in the region toppled or damaged.

The New York City Department of Environmental Protection, which owns and manages thousands of acres of land around the city's upstate reservoirs, recently announced the start of a major forestry project to remove about 15,000 storm-damaged trees from 120 acres of land on Houck Mountain near the Cannonsville Reservoir.

About 60 percent of the trees at the site have been felled or damaged by Irene, Lee and Sandy, said DEP spokesperson Adam Bosch.

The trees will be harvested by a local contractor who bid for the job, Ostrander Logging of Walton, and milled into lumber. Many of them are valuable hardwoods, like black cherry.

Six other projects to remove trees damaged by storms or invasive insects were begun on city watershed land in 2013, at the Ashokan, Rondout, Kensico and other reservoirs. All told, the seven recent projects will yield about 2.7 million board feet of lumber -- enough to frame almost 200 single-family homes.

Below: A site near the Kensico Reservoir, where a DEP logging project to remove storm-damaged trees is nearly finished. Photo taken in May of 2013. 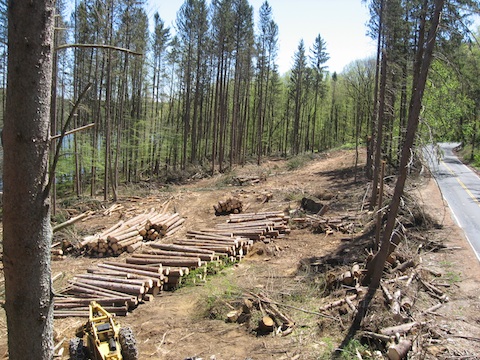