Arrest made in New Paltz shooting 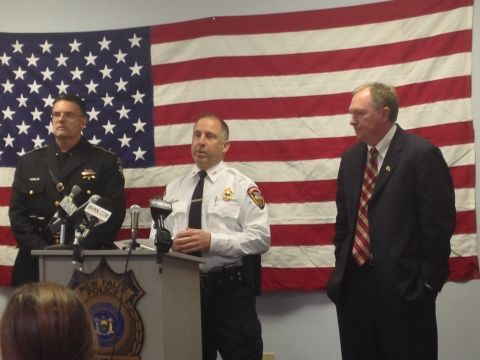 Above: Police announce the arrest of 21-year-old Basheem Bennett for a 2 a.m. shooting at Murphy's Restaurant and Pub in New Paltz that left one man dead and a woman injured. Left to right: Lt. Perry Soule of the Ulster County Sheriff's Office, Chief Joseph Snyder of the New Paltz P.D., and Ulster County D.A. Holley Carnright. Photo by Katherine Speller.

New Paltz police have arrested a suspect for a 2 a.m. shooting at Murphy's Restaurant and Pub on Sunday morning, which left 29-year-old Poughkeepsie resident Ryan Gray dead and a 26-year-old woman wounded.

"This is not a random act of violence nor the act of an active shooter running around town. We believe that the victims and perpetrator were known to each other. This incident is a spillover from some incidents in the City of Poughkeepsie," Snyder wrote. "This incident did not take place due to an overcrowed bar, filled with intoxicated people that began to fight and resulted in this shooting incident. This act just happened to take place where it did based on window of opportunity."

Our correspondent Katherine Speller was on hand for this morning's press conference. Below: Tweets from Speller and other reporters at the conference.