On Sullivan County's back roads, power is slow to return 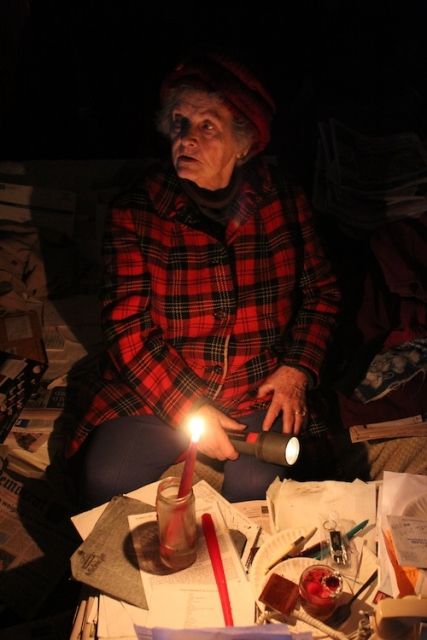 Above: Betty Knack lights a candle and tries to stay warm in the hamlet of Callicoon on October 31. Photos by Jason Dole.

As another post-Sandy night descended on Sullivan County, thousands were still without power.

The Town of Fremont, in the northwest corner of Sullivan County, was mostly out of electricity, and some roads were still listed as closed. Town councilman John “Jack” Niflot said that Fremont Center, Mileses, and Obernburg were still without power.

Left: CR 94 is barricaded between North Branch and Obernburg.

“There are three trucks up on the River Road by Callicoon and, from what I was told, when they’re done there they’ll be up here,” said Niflot, adding, “Any time like this there’s always outages.”

Heading towards Fremont Center from North Branch, it was clear why. Just past a barricade on County Route 94, a tree was still hung up in the power lines. One wire was down on the ground. A county worker sat in a truck with Gradall equipment behind him, likely waiting for electric company workers to do their job so he could do his.

In Fremont Center, few cars were out. Here and there was the infrequent commuter returning home for the evening, or the even less frequent tree or electric work vehicle. Workers in one NYSEG truck sitting near the Bjorklund ballfield refused to even venture a guess as to when power would be back on, for fear of getting people’s hopes up.

Right: Trees are still hung up in the powerlines on CR94.

“I haven’t even seen one truck,” said John Kielbasa of Fernwood Firearms in Hankins. He’s been keeping an eye out, too. His business was lit up, as Hankins has power, but just up Route 97 his home and others in Long Eddy were dark.

“All I have is a blown fuse on the pole,” he said. “I gave them the pole number. I’ve been calling since Monday.”

Adding to the frustration is the apparent randomness of who does and does not have power. It’s possible to be in a house without electricity and look down the road at working streetlights.

Down Route 97 from Hankins is the lit-up hamlet of Callicoon in the town of Delaware. Less than a mile away from, Betty Knack and Henry Hermann sat in Hermann’s dark, cold farmhouse. Knack lit a candle she had placed in a jar of water.

Left: Storm damage in front of a home near Fremont Center.

“I only have the two candles for tonight,” said Knack. She seemed inconvenienced, but not concerned. The elderly couple could stay in Knack’s home with electricity near Liberty but, she said, “we’d just have to drive back here to feed the cats anyway.”

While many in Sullivan County lit candles for light and a little warmth, others lit them for fun and put them in jack-o-lanterns. It was, after all, Halloween night.

Officials at the county level, along with those in other villages, canceled Halloween activities and encouraged parents to do the same. Despite that advice and the ongoing state of emergency in Sullivan County, trick-or-treaters were out in droves in Jeffersonville this evening. Power was on in the village, and the fire department helped out by slowing traffic on Route 52 with their lit-up fire trucks.

“You can’t cancel Halloween,” said Barbara Winfield. The Jeffersonville resident broke out her winter coat, donned a pair of devil horns, and sat down at street level in front of her house so that trick-or-treaters wouldn’t have to walk up the steps. “It’s after the storm, and the kids have been looking forward to this for months. They’re out, so we’re out.”

Right: Barbara Winfield hands out candy for Halloween in Jeffersonville.

Meanwhile, back in the town of Fremont, Jack Niflot said he was hopeful that he and his neighbors would have electricity back “in a day or so.” Meanwhile, he’s staying put and trying to keep warm without the aid of a kerosene or propane heater.

“As long as it doesn’t go below freezing, I can handle it,” he said.