Spring is busting out all over 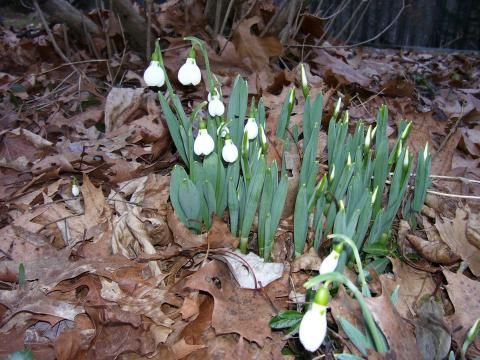 Spring already? Reader Laurie McIntosh sent us this photo of snowdrops in bloom, taken in Woodstock on Feb. 10.

Snowdrops are usually the first bloomers in the garden, beating out even the early crocuses for the title. But this is a bit early, even for the hardy Galanthus nivalis: In our climate, the snowdrop usually blooms in late February or early March.

Central New York gardener Donna, who blogs at Gardens Eye View and gardens near Oneida Lake, writes that she had snowdrops at the end of January:

I have never seen a snowdrop in bloom this early here in my now zone 5b garden.  We have been moved from a zone 5a to a 5b.  And with the snowdrops are crocus, hyacinth and dwarf Dutch iris getting ready to burst forth and bloom.

In New York City, whose spring is weeks ahead of ours, they're well past snowdrops and into hellebore season, writes blogging gardener Karen Orlando.

...you probably should still consider holding your breath when looking at the winter buds on almost everything. You might miss something otherwise.

Readers, are you seeing early signs of spring?