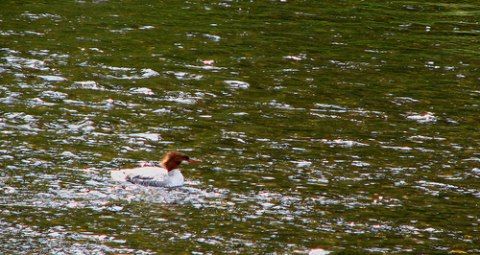 Catskills Photography took this photo of a female (or possibly a juvenile) common merganser on the Neversink River over the weekend.

This sleek-billed creature is a duck, though it does all sorts of un-duck-like things. The merganser eats fish, makes its nest in a tree, and doesn't make a habit of quacking; the only sound the merganser makes is a rough croak when alarmed or looking for a mate.

Though not seen as often as the ubiquitous mallard, the merganser is fairly common on Catskills creeks and rivers, where it dives for small trout and aquatic insects. In May and June, the females will seek out holes in tree-trunks to lay their eggs. Some will lay eggs in another female's nest, or even the nest of a wood duck, leaving the resident mother with an adoptive family that she will raise happily along with her own.

To catch its swift prey, the merganser is equipped with a set of sharp "teeth" -- not true teeth, but pointed spikes made up of the same substance as the merganser's bill.

Sixty million years ago, the authors of Evolution write, the little dinosaurs that were ancestors of all birds had true teeth. In the process of adapting to a new life on the wing, they lost their teeth, and have never recovered them. The merganser's "teeth" are evidence that nature often makes do with what it has to work with:

For evolution, it is simpler to modify the form of an existing organ -- the beak -- than to return to the tooth-making recipe that has been lost for sixty million years.