Knocked down by Irene, Schoharie is getting back on its feet again 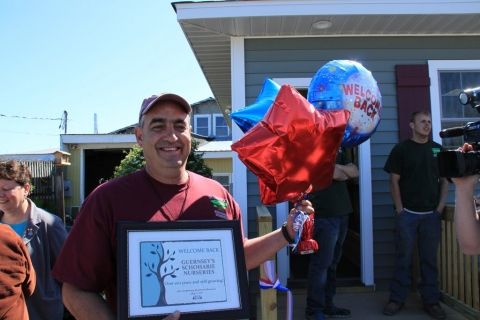 Floyd Guernsey III, owner of Guernsey's Schoharie Nursery, smiles for a TV camera at the nursery's grand re-opening ceremony on May 11. Photo by Donald Edmonds.

Like many of the towns in the path of the raging Schoharie Creek, the town of Schoharie took a heavy hit during the flooding from Irene and Lee. Even now, nearly nine months after the flood, much of the village is still out of commission.

But with spring in full bloom, Schoharie is coming back to life. Earlier this month, a beloved local icon opened its doors again for the first time since the floods shut it down last August: Guernsey's Schoharie Nursery on Bridge Street.

The nursery has been in the Guernsey family for 123 years. The Times-Union reports that owner Floyd Guernsey III was determined to open it this spring, even if it meant delaying his return to his equally flood-ravaged house.

Guernsey told the Watershed Post that while he's gotten a lot of support from his neighbors, the nursery isn't out of the woods yet.

"To get people to know that we're open again, that's a difficult thing," he said. "It's been good, all the customers have been good, we just need more of them."

With Memorial Day Weekend around the corner, he may just get a few.

Just up the road on Route 30, fields are green and growing at another local landmark, Schoharie Valley Farms. A few weeks ago, farmer Richard Ball began picking asparagus in fields that were drowned under ten feet of water last August. The Mountain Eagle's Erika Eklund writes that the Schoharie Valley is coming back to life:

Fields are once again being transformed into a patchwork of colors with rows upon rows of freshly plowed soil and newly planted crops.

Farm stands and agricultural businesses throughout the valley are filling with new spring plantings and opening their barn doors once again to eager customers anxious to get their hands on the first products of the season.

Around Schoharie and everywhere else that felt the brunt of Irene, the long work of recovery goes on.

Below: A slideshow of photos taken on April 19 of flood recovery work in Schoharie and Prattsville, by a group of student and faculty volunteers from the Millbrook School in Dutchess County.