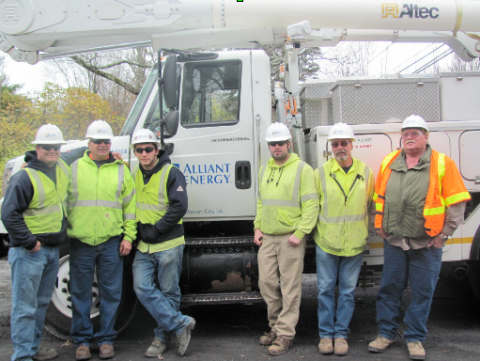 Gregory Brouwer and his Alliant Energy crew left Iowa at 6am Sunday and drove two and a half days to get to New York, driving through Pennsylvania during the worst of the storm. Early Thursday afternoon, they were preparing to “go live” with the major line on Wittenberg Road in Woodstock.

“I’m not sure how they organize it all,” said one of Brouwer's crew members. “Maybe Homeland Security? We just get the call and go."

“People around here are really, really nice,” said Steve Arneson of southern Minnesota, “with the very rare exception. But those people are just frustrated. We’re used to that.”

“One lady,” says another man, “stopped and rolled her window down and started complaining that it was fifty-six degrees in her house. Wow. Be happy. You have a house. But generally, people have been great. And I’m loving your scenery. Cool mountains.”

At the top of the pole (above), John Hutchins wears arm-length super heavy duty rubber gloves as he manipulates switches.

Brouwer looked at his handheld to be certain about whether it was Hutchens or Hutchins. “But it won’t matter," Brouwer said. "He never goes on the Internet.” But he does know how to flip the yellow switch.

The Alliant crew had been working on this spot since Thursday morning. When the word came down to “juice it up” and the turn-on succeeded on Thursday afternoon, their pleasure and relief was palpalbe. Now they could get on to the next one. There is an order to the process: main routes, then branches; electricity rising like sap in a tree.

Shauna Kanter of Wittenberg Road is extremely pleased with the Alliant crew. She is back on, and takes the time to say thank you (above) before scurrying back inside to get caught up on matters electronic.

"Well, that should be about another thousand back on.” The team rolled north and west, bringing heat and light (above).

Meanwhile, nearer to town, Sunfrost Farms on Route 212 refused to curse the darkness (below).