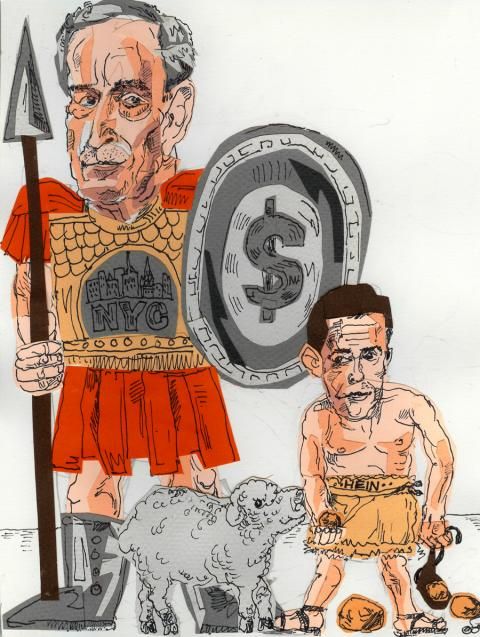 Above: "David and Goliath," a cartoon by Gary Mayer showing Mike Hein as a stone-throwing David to NYC's Golaith, which ran on the Watershed Post a year ago.

Maybe Ulster County Executive Mike Hein is a bona-fide upstate firebrand representing the heartfelt opinions of his constituents. Or maybe he's a craven political opportunist playing on a long-simmering hatred of New York City to rally his upstate voter base.

Either way, Hein is jacking up the volume on an unabashedly popular Catskills sentiment: That the New York City Department of Environmental Protection, which manages the city's reservoir system upstate, is an "occupying nation" in the Catskills.

Hein has consistently confronted the DEP over issues that affect Ulster County, including the DEP's controversial releases of turbid water into the lower Esopus and the city aqueduct's long-term soggifying of the town of Wawarsing. But this fall, he's ratcheted up the rhetoric. In December, he asked the New York State Department of Environmental Conservation to find the DEP's Esopus releases illegal.

Yesterday, Hein made his biggest anti-DEP stink yet, in an open letter to New York City Mayor Michael Bloomberg. In the letter, which was posted by Capital Tonight, Hein blames the DEP for "polluting our waterways,"  "causing massive regional economic hardships," and for paying "far less than their fair share of property taxes."  Hein then implores that Bloomberg himself step in to "bring justice to this situation."

Hein's letter made waves -- the Associated Press, the New York Daily News, and many others wrote about it, prompting the DEP's spokesman, Farrell Sklerov, to dismiss it as a "cheap political stunt."

Hein may be sincere, but he's also a political "comer who is increasingly talked about for statewide office," according to the New York Daily News. As one of Hudson Valley Magazine's "People to Watch in 2012" picks, Hein told the magazine that he has been approached for bigger things:

And although he has been approached about higher office — he was rumored to be on the short list for Andrew Cuomo’s lieutenant governor and admits to being asked to run for Congress — he demurs. “That’s all very flattering,” he says, “but I got into government to make a difference for the people of Ulster County.”

Maybe. Whatever his motives, Hein is ripping the bandage off an old wound with gusto.

Read the entire open letter to Bloomberg below.