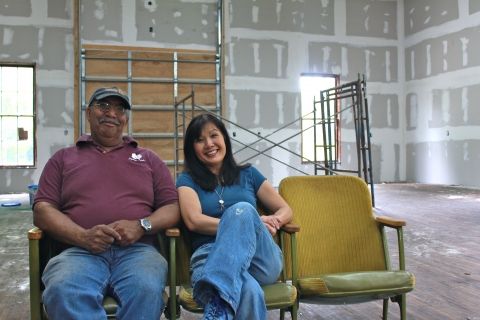 Joe Moskowitz and Pauline Liu in the freshly-sheetrocked 4,000-square-foot space currently being transformed into the Arkville Cowdome. Photo by Mellisa Misner.

This Memorial Day, a new venue for Catskill entertainment will be opening up in Arkville: The Cowdome. The 4,000 square foot space, which sits behind Cha Cha Hut BBQ on Route 28, will host community-oriented events such as movie screenings, concerts, banquets, weddings, mini-golf and maybe even some laser tag, according to its creators.

Until recently, the space was home to Roberts' Auction, now located on Route 28 in Boiceville. Building owners Joe Moskowitz and Pauline Liu have decided to bring the Cowdome – which was originally a community space and event venue in the early 1920s – back to its roots and provide the Catskill region with a new entertainment option.

This weekend, the Cowdome will host its inaugural event: The screening of a post-apocalyptic vampire movie shot in the region, and a visit from its director, who is currently working on another film in the area.

Joe Moskowitz: Well, this is sort of a half-century delay of reopening. In 1922 the building was called ‘Todd’s Hall’ and it was a place where they had music, dancing, banquets, motor skating, boxing and basketball. It was always a venue for entertainment. When we bought it we always intended to do this sort of thing. The auction came around and we were glad to have it. Now we want to use this space for what it was built for.

WP: Why call it The Cowdome?

JM: It’s something we think would be memorable. For half a century it was a farm supply store. This was a dairy farm area. It's a large indoor venue, so why not?

WP: What is your dream of what The Cowdome could become?

JM: Just about everything you can imagine. We are going to be showing movies – not all the time – we won’t do any one thing at a time, in fact. We are going to open with a free screening of the movie “Stake Land,” which was released in 2010. The director, Jim Mickle, is directing “We Are What We Are,” which is currently being filmed in this area, so he will be on hand to conduct a question-and-answer afterwards.

Pauline Liu: People need to bring their chairs. I don’t know how many people are going to show up, but we don’t have enough chairs to go around! We’re going to have to improvise. That’s not a bad thing, though. It would mean we have a big turnout!

JM: We will also have concerts, banquets, weddings and we will host pop-up markets. We are looking, once the weather gets a bit colder and people are looking to go indoors for recreation, to have indoor miniature golf. We are working with a man from New Kingston and Long Island by the name of Keith Purdy, who will set up an Oxberry Animation Machine, which is what they used to use before computer-generated imaging and what they used to use for all high-end animation. We are going to be open all the time, for movie festivals – you name it. One of our great sources for ideas has been Cha Cha Hut BBQ. Frank and Cherie Davis operate their wonderful restaurant in the front of the building. They’ve had some wonderful ideas.

WP: Tell me more about this animation machine, why did you decide to bring that in? What do you think it will bring to the Cowdome?

JM: Well, it was Keith's idea; it’s among the things he’s done throughout his career. He’s done the opening for “Superman” and “Alien” and he’s got a tremendous background in motion picture and commercial production. He had that machine, among other pieces of equipment –  it’s a very large piece of equipment. We had the space, and the idea is that if we have film festivals it won’t be necessarily just showing video. We could actually have workshops and teach people how you actually make the movies.

WP: Local ‘scuttlebutt’ has been popping up about the relationship between The Cowdome and Cha Cha Hut BBQ. Want to set the record straight?

JM: We are working together, but it’s our building and we are putting a lot of effort in to work with anyone in the community. If they have an idea, we want to work with them.

WP: Any thought as the Cowdome gets set to open?

JM: I was sitting here [at Noah's Barn in Arkville] yesterday and we had some movie people from “We Are What We Are” building sets, then I went across the street to where the Cowdome is and I looked at these posters that the Davises had designed, and we were taking delivery on the animation machine, and at the same time the contractors were finishing putting the sheetrock in the Cowdome, and I was like, ‘This is wonderful. It’s really cool.'

PL: We’re thrilled about this, but it’s going to be a lot of work. People have been giving us a lot of well wishes on Facebook, and we need all the help and luck we can get because it’s a big undertaking.

The Cowdome is set to open its doors on Sunday, May 27 at 6 p.m. with the showing of “Stake Land.” Head over to 43311 Route 28 in Arkville to check out the event for yourself. To keep up with what's happening at the Cowdome, check out their Facebook page.

Notice something fresh in your neighborhood? Let us know at editor@watershedpost.com.