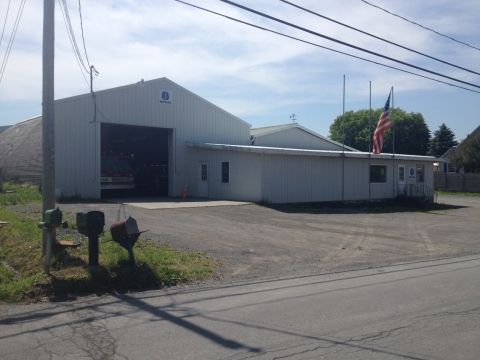 The Schoharie Fire Department's current temporary location on Fort Road, and the future site of the rebuilt Niagara Engine Co. No. 6. Photo by Matt Brisley.

After having seven and a half feet of water flow through it in last year’s floods, Niagara Engine Co. No. 6 is officially being relocated and rebuilt.

In a press release on Tuesday, Congressman Paul Tonko applauded the Federal Emergency Management Agency’s (FEMA) allotment of over $900,000 – or three-quarters of the cost to replace and relocate the firehouse in the village of Schoharie. The other 25 percent of the cost will be covered by the state of New York, under an agreement announced by Gov. Andrew Cuomo's office this spring.

The new firehouse will be built on the Fort Road property the Schoharie Fire Department is currently using as a temporary location. The site, a former tractor sales and supply store, will be purchased from its current owner.

Member and former chief of the Schoharie Fire Department Matt Brisley, a 28-year veteran of the fire department, said he was disappointed the engine company could not stay in its old location in the middle of the village, but was glad FEMA was helping to fund the new permanent location on Fort Road.

“It is kind of bittersweet that we're not going to be in the heart of the village anymore,” Brisley said.  “But from a fiscal standpoint, if this is what FEMA is willing to do for us, there's no way the people of Schoharie could afford to do this on their own.”

Brisley said the department voted unanimously at a spring meeting earlier this year to do anything possible to keep the fire company in its original location, including discussions that involved building a two-story firehouse to avoid future flood damage, but ultimately they were unable to come up with a workable plan.

“We would have had to raise it up an ungodly amount,” Brisley said. “This location where we’re temporarily at now seems to me the most practical spot.”

Brisley said there is not a timetable for the rebuilding process, but FEMA will fund the building of a temporary structure so the department can get their fire engines under cover until the new firehouse is built.

In a press release, Tonko said the region could not forget the damage Hurricane Irene and Tropical Storm Lee, and he hoped working with FEMA was helpful as the area continues to recover.

“Today’s news is another small step in the right direction of the rebuilding process. I will continue to work with FEMA and other federal agencies to ensure our neighbors and local communities have the resources we need to enable a full and strong recovery.”

While the FEMA funding is good news, it may be a long time in coming. In a story this week, the Schoharie Times Journal reports that the town of Schoharie is facing delays in getting reimbursed by FEMA for flood rebuilding projects, partly because "FEMA keeps changing contact people and paperwork is getting lost."