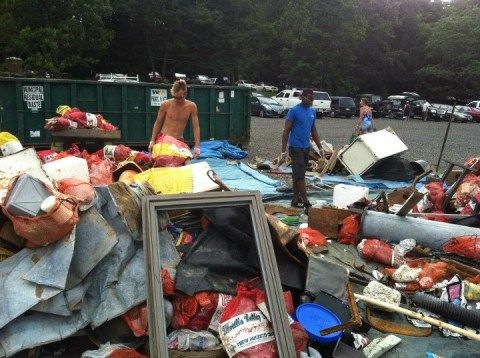 Above: Some of the trash collected at this year's annual Delaware River cleanup, sponsored by Kittatinny Canoes in Milford, PA. Photo from Kittatinny's Facebook wall.

For over twenty years, a dedicated group of volunteers has been making an annual four-day pilgrimage to the Delaware River to do the heavy, mucky work of pulling trash from the river bottom.

Today's Sullivan County Democrat features a few of the doughty trash warriors, one of whom tells the reporter that the river is getting cleaner every year:

Jeff Helms from Stroudsburg, PA, described how, “When I first started you could find a bottle or can every five feet – now it’s hard to find one. It’s been cleaned up.” He’s been doing the cleanup since the first one in 1992 and thought there’s less trash because people have began to care about the environment, and because it’s clean – it’s not so easy to just throw trash in it.

Helms continued, “I’ve seen 6-foot earth moving tires in the river. I took two canoes, tied them together, and we hoisted it between them with the other volunteers. Years ago… you could dump into this river, and that’s how it got so dirty.”

Along with the story, the Democrat ran an eye-opening little sidebar of stats on the Delaware River's trash problem through the years, Harper's Index-style. Here's a segment:

Among the unique items found in the river:
• 18 sticks of dynamite
• a bathtub
• test drilling materials
• an air conditioner that was a home to an eel
• a human spine
• a loaded shotgun
• an old wooden brandy/whisky barrel.

A human spine? And the cleanup crew keeps coming back for more? We're officially impressed.