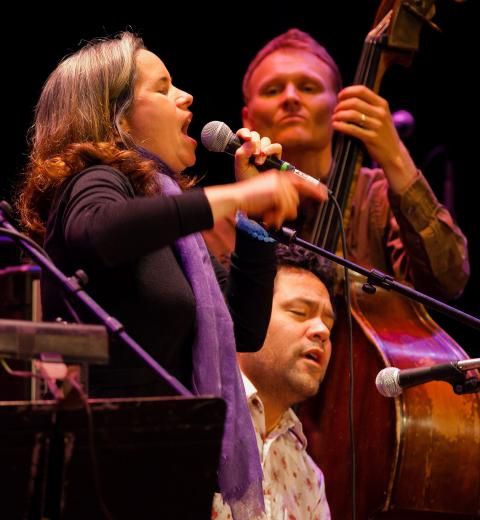 Above: Natalie Merchant performing at the Shelter for the Storm benefit concert at UPAC on November 18, with Dan Littleton and Chris Wood. Photo by John Desanto, of the Times Herald-Record.

The Watershed Post was proud to be one of the many, many organizations to help out with a pair of flood-relief benefits organized in Ulster County last month by the Bardavon, Levon Helm Studios, and Radio Woodstock.

The twin concerts happened on November 18 at the Ulster Performing Arts Center and on November 19 at the Levon Helm Studios, and they brought in an amazing number of donations, altogether totaling $166,000. All the proceeds are going to the Phoenicia Rotary, the Prattsville Relief Fund, the Mark Project, and Ulster County Habitat for Humanity Flood Relief.

The concert organizers singled the Watershed Post out by name from the stage to thank us for our work during the floods. (How cool to be name-checked in front of Natalie Merchant!) All we can say is, thank you!

Here's the full press release from the Bardavon about the fundraisers and where the funds will end up.

SHELTER FROM THE STORM

Two benefit concerts raise in excess of $100,000 for affected communities!

Kingston, NY- The Bardavon, Levon Helm Studios and Radio Woodstock 100.1 are happy to announce the Shelter from the Storm concerts have raised $116,000 to benefit our neighbors devastated by Tropical Storm Irene.

All artists donated their time, and all net proceeds from these concerts will be distributed between:

These organizations serve the tri-county region that includes some of the areas hardest hit in the Catskill Mountains during Irene, including Boiceville, Phoenicia, Mt. Tremper, Allaben, Big Indian, Oliverea, Fleischmanns, Clovesville, Arkville, Margaretville and Prattsville.

In addition to monies generated from ticket sales, funds were raised through the sale of merchandise, including the donation of a commemorative concert poster designed and sold at the UPAC concert by artist Mike Dubois as well as the sale of merchandise in stock at Levon Helm Studios which was sold and donated to the cause. Money was also raised through numerous private donations made to Shelter from the Storm including a very generous donation from the Thendara Foundation made in memory of Peter S. Reed.

In addition to the artists donating their time, the staff of Radio Woodstock 100.1, Levon Helm Studios , as well as the Bardavon and The Ulster Performing Arts Center all donated their time and energy to the event including the entire stage crew, security teams, ushers, bartenders, catering team, box office staff and runners. Additionally providing their services for the event free of charge were members of the Kingston Police Department and Ulster County Sheriff’s Department. Sound and band gear were generously donated by Ballantine Communications and Vincitores Piano. Catering was supplied by Stone Soup, Deisings Bakery and Frank Guido’s Little Italy in Kingston as well as Café Primavera in Poughkeepsie. Video footage was supplied by www.watershedpost.com and various contributing videographers who documented the storm damage as it was unfolding.

Correction: The original headline on this story said the amount of money raised was $166,000. It was actualy $116,000. Also, the original version of the caption at the top of the page misidentified Dan Littleton as Dan Little. This post has been corrected.