In Schoharie Village, a mayor pleads with residents to stay 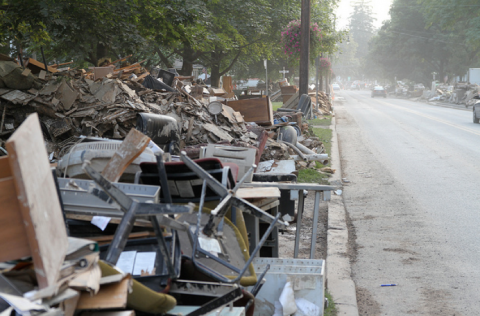 In the village of Schoharie, the county seat of Schoharie County, flooding has hit the community so hard that for the first week after Irene hit on August 28, many Schoharie residents were ready to give up.

Musician Martin Rivas, who owns a house in Middleburgh and has championed Schoharie County relief efforts with his "After the Flood" benefit CD, visited the village of Schoharie on Thursday, September 8. Rivas, who had spent the first days after the flooding in the village of Middleburgh, was shocked by conditions in Schoharie village.

The difference, Rivas said, was in the spirits of the town residents.

"It's 10 times worse than Middleburgh," he said. "In Middleburgh, spirits are intact. In Schoharie, I tried to walk down a street and take account of buildings that were to be demolished, and then I stopped when I realized that it was every single one of them."

Schoharie residents looked "as if they are resigned to the fact that no one cares," Rivas said.

This week's edition of the Schoharie County newspaper the Times-Journal ran a story about Schoharie that confirmed that for the first week after the storm, many village residents had given up hope of rebuilding.

[10 days ago], many families claimed they'd had enough and wouldn't rebuild.

"People were really fed up," Mayor [John] Borst said. "It was almost overwhelming. FEMA wasn't helping the way people expected, most of them got zero from their homeowners' insurance. The sentiment was that they weren't staying." ...

He said more than 275 homes and businesses suffered significant water damage--in other words, over four feet of water on the ground floor.

Such damage caused despair at first -- Mayor Borst called it "A canyon of gloom[.]"

... More than one gutted home had "For sale as is," and other owners said they'd had enough.

But the darkness is Schoharie village is lifting, the story reports, thanks to the volunteers who have arrived in the town:

[T]he mood changed as homeowners pitched in and dozens, even hundreds, of volunteers turned out to help.

Among those were 300 members of the Church of Jesus Christ of Latter-day Saints from around the Capital District came to Schoharie, Middleburgh and Esperance to help clean up ...

"We've had a lot of support," said Debbie Collins, who was working on her Fair Street home. "We had 20 farm boys from somewhere in New York come and muck out the basement." Although she and her husband, Randy Jenkins, had planned to sell their home earlier this year, now they'll repair it and wait.

"Every day it's getting better," Ms. Collins said.

The story ends with a plea from the mayor of Schoharie village to residents not to give up:

"People who have decided to rebuild are an inspiration to those who are undecided," he said. "People are pulling together."

Mayor Borst pointed to several instances of residents who vowed they'd "never set their head on a pillow in Schoharie again" had changed their minds a week later.

"I think spirits are starting to rise," he said. "I'm just asking people not make any hasty decisions.

"We can get this done, a little at a time. We've got a great bunch of people, and we're gonna make it."