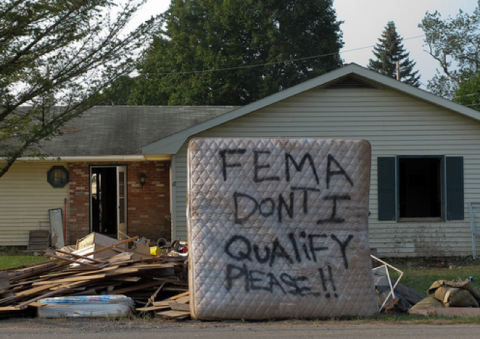 Above: A house in Schoharie County after the flooding caused by Tropical Storm Irene. Photo by fixbuffalo, via the Watershed Post Flickr pool.

The Associated Press ran an in-depth feature story about flood victims mired in red tape in Greene and Schoharie counties this week. The article, which is exhaustively researched, is well worth reading in full. Its focus is on the frustratingly slow pace of recovery:

Many, even the few with flood insurance, say they still are awaiting insurance company checks delayed in part by the volume of claims and that has, in turn, delayed Federal Emergency Management Agency funds ... When checks do arrive, they average $5,000; the maximum is $30,200 for total loss of a house. That's far less than many expected after a string of press conferences by state and federal officials promising that insurance and government aid would cover most of the $1 billion in damage caused in New York.

The story is full of interviews with frustrated but hopeful shopowners and homeowners across the Catskills:

"This is almost worse," said Heather Vilegi, co-owner of Middleburgh Hardware in Schoharie County. Like most, she is indebted to scores of neighbors and volunteers who came from afar to help in the recovery effort.

"Now everyone is tired and cranky and finding there isn't much government help," Vilegi said. "Flood insurance is taking a long time."

..."Town meetings are getting a little scary," said Michelle Petricini, 34, outside Beth's Cafe [in Prattsville] where she works. The sessions can be heated these days, with slow insurance payments that delay FEMA checks frustrating residents.

The AP also talked to FEMA and insurance companies about the red tape:

"Sure, that happens," said FEMA spokesman Nate Custer. "People are discouraged. They are sometimes in a state of shock. It's a huge setback for a lot of them and when they have a little bit of delay, it just exacerbates those feelings."

"It's a slow process and it has a lot of red tape," said Dan Corbin of the insurance agents association.