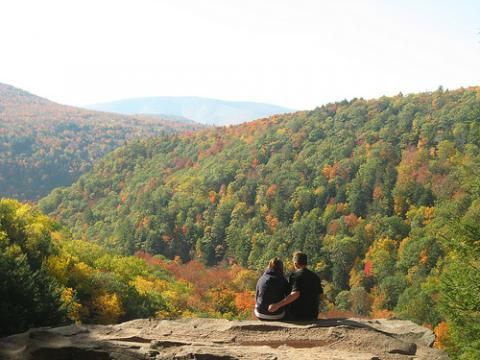 Landsel, a local boy whose grandmother had a house in Mount Tremper when he was growing up, wrote in yesterday's paper that he's been making the Route 28 pilgrimage his whole life. But in the wake of the flooding, Landsel worried about what he'd find this time:

Like many other natives of the region who had long ago moved on elsewhere, I watched in the days after Hurricane Irene, horrified to see the images of flooding that had ravaged much of the real estate along the Route 28 corridor. Upset turned to frustration, as the local media started to ignore the area, spending more time talking about places like Vermont with better public relations machines, as if the Catskills, my old, stubborn, stuck-in-the-past Catskills, simply didn’t matter.

Much to Landsel's relief, he found the Catskills of his childhood mostly intact: bruised and battered, but getting back to business, and still defiantly shabby-chic even after its thorough soaking.

But for every business (the Cheese Barrel) that will need to rebuild, there was another (Binnekill Square Restaurant) up and running. Tough as times ahead may be for some, on balance, to say the region is out of commission is false. Nature may have done a number, but this is the Catskills, where nature and man (and the Department of Environmental Protection) have been doing battle forever — this is just the latest episode. Look up in the sky, it’s still the same beautiful place. Just like it probably always will be.

Landsel has also been talking the region up on Twitter the last week or so, presumably while doing research for the story. A few sample tweets:

(He also mentioned the Watershed Post in the story. Thanks for the shoutout, NYP: Nice to see the Gotham tabloids are reading us.)