How did a nice little hamlet like Pine Hill end up on a great big Trailways Bus? 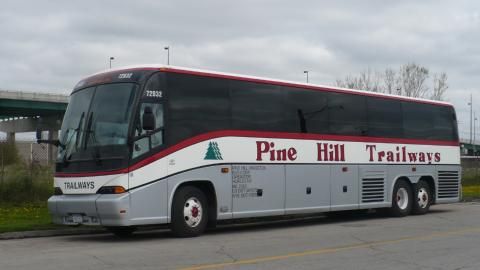 That’s a question I asked myself nine years ago when I first moved to Shandaken. Back then, I foolishly assumed that a giant mother company named Trailways owned all the Trailways buses nationwide. As we all know, assumptions can get you in trouble. That one was still getting me in trouble as recently as last night, when my attempt to write and file this Dispatch from Shankaken got vaporized by sputtering power outages that let up just long enough to lull me into a false sense of confidence that they were over for the night. I was three minutes away from finally filing my finished second draft of this when the power cut out and stayed out for hours, taking my rewritten piece with it into the same electronic black hole that ate my first partial draft earlier in the evening.

Don’t say it. I know about backing up work (click – I just backed this draft up for the second time already). OK, maybe I was lax the first time – but I swear I saved the second draft more than once before the big darkness fell. My computer tells me otherwise, but I don’t believe it. I think it got drunk on spiked juice and blew it. Seems a transformer somewhere checked out and took me and a whole lot of other people down with it (click – third save. I’ll stop mentioning them now but trust me they are ongoing).

The power outage blacked out 1800 customers, I’m told, and I know at least Mt. Tremper, Phoenicia, Shandaken and Pine Hill were affected by it. Which brings me back to the hamlet that started all of this in the first place, Pine Hill. Pine Hill is a hyper-charming, laid-back rustic hamlet that I appreciate more each year I live around here. I liked Pine Hill the first time I laid eyes on it, but Pine Hill is not exactly a major city and so I thought some nine years ago; why is Pine Hill plastered on the side of a Trailway Bus?

I think I should warn you up front that this third draft of my dispatch is nothing like the first two that I tried to file. I just don’t have it in me to go back there again. You see when it first occurred to me to write a little something about Pine Hill Trailways, I thought it would be something simple to knock off. But the Internet is a funny thing. It can turn the simplest of questions into an epic quest. And by this point I give up and am throwing brevity to the wind. This story comes with pointless tangents, and I haven’t rejected a single one of them yet. This is a report in progress that has already consumed its first dispatch without even having started. To Be Continued…

A highway runs through it: Pine Hill's past points to the future

Struggle with death illuminates a life