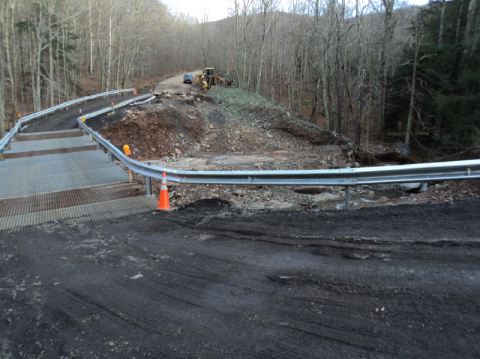 Above: The bridged ravine on Oliverea Road. Photo by Aaron Bennett.

The governor's office announced on Friday that Rte. 23 in Greene County between Prattsville and West Settlement Road is open today. [This post has been changed -- see correction below. -- JR]

We also hear that the ravine on Oliverea Road in Ulster County has been successfully bridged, as promised, today. Aaron Bennett sent us a photo, which you can see above.

If you've got photos of re-opened Rte. 23 or of Oliverea Road bridge, send them to us: editor@watershedpost.com, or post them in our Flickr group.

Governor Andrew M. Cuomo today announced that State Route 23 in Greene County will reopen to traffic on Monday. The roadway was destroyed by the floodwaters of Hurricane Irene and Tropical Storm Lee.

The project was completed in less than three months, as part of the Governor's efforts to expedite the restoration of roads and bridges damaged by the late summer's hurricane and tropical storms.

"After the flooding destroyed Route 23 this past summer, we deployed all available state resources to make sure this critical link in Greene County could reopen as soon as possible," Governor Cuomo said. "I am pleased that as a result of our focused and expedited efforts this roadway will be open Monday to New Yorkers once again, and I thank the contractors and construction crews for their hard work on this project."

Joan McDonald, Commissioner of the New York State Department of Transportation, said, "Our designers, maintenance crews and contractors worked tirelessly to restore mobility to flood ravaged areas in Greene County and across New York State where our highway and bridge systems suffered extensive damage. Completing a full road reconstruction in less than three months is an extraordinary feat for us and for the community who depends on this stretch of road for their everyday travels."

The road, closed between County Road 63 (West Settlement Road) and State Route 23A in Prattsville, was fully reconstructed as part of a $1.5 million project completed by Rifenburg Construction of Troy, Rensselaer County. Work to rebuild Route 23 began on September 26.

The five-mile section of road was initially damaged during Hurricane Irene on August 28, but then completely destroyed by Tropical Storm Lee's floodwaters 10 days later. Portions of the road were washed away and had to be completely rebuilt. Crews restored travel lanes and shoulders, replaced guiderails and culverts, relocated utilities and restored creek embankments.

Statewide, more than 400 road segments and bridges were closed due to flood damage and have been subsequently repaired and reopened. Only two sections of road, which include three bridges, remain closed to traffic. Route 103 in Rotterdam Junction, Schenectady County, is expected to reopen to traffic in January 2012 and Route 42 in Lexington, Greene County, is scheduled to reopen in February 2012.