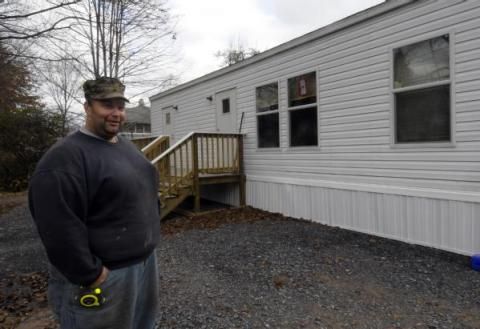 Photo of Schoharie resident Clinton Manchester, who is living in a FEMA trailer while he rebuilds his house. From the caption: "FEMA is placing these units close to the homes of the hurricane survivors, enabling easy access as they rebuild." Taken by FEMA photographer Hans Pennink.

Let's say, for argument's sake, that you're a homeowner who's been hit hard by flood damage, you've lost most of your worldly possessions, and you desperately need somewhere stable to live.

It seems like a FEMA trailer -- er, "temporary housing unit" -- would be a good solution. You could set it up on your own backyard and live in it while you rebuild what's left of your home.

But there's a catch. FEMA won't allow you to put the trailer anywhere that's in danger of flooding -- which, obviously, includes your property, or you wouldn't have been flooded in the first place.

It's a predicament worthy of Joseph Heller. And it's one faced by dozens of New York State families in the wake of flooding from Tropical Storms Irene and Lee.

Today's Daily Star reports that although 255 families in New York State have been approved for FEMA temporary housing, only 20 -- less than ten percent -- have actually received a trailer. The rest are still in limbo, as FEMA agents, local officials, and flood victims wrangle over building codes, permitting issues, and shifting floodplain maps.

Meanwhile, over 100 trailers sit unused in a lot in Cobleskill.

From the Daily Star story (which is well worth reading in its entirety):

Officials in Prattsville said they were briefed by FEMA on Wednesday on a plan to set up about 20 trailers at Moore's Trailer Park in the village.

"Right now we know we have about 18 families that need temporary house, and we're trying to get that housing in town because obviously the families want to stay in town," said Kevin Piccoli, chairman of the volunteer Rebuild Prattsville steering committee. "We're having difficulty working out flood plain elevation with FEMA. Every time we talk to them, the numbers keep changing.

"At best, they will have the trailers here in January, which is almost five months after the flooding. We have the location, but we're going to have to raise the elevation a couple of feet. People here are still waiting for temporary housing while they've had many units sitting in Cobleskill for a couple of months. It's just complication after complication."

For some flood victims, moving to a trailer park isn't an option, even if it's the only way they can get FEMA housing.

Yesterday, Fox 40 WICZ TV in Binghamton aired a news segment on flood victim Irene Phillips of Conklin, who needs housing but whose property is in a floodplain, and who can't bring herself to move into the trailer park where FEMA wants to put her.

Suzanne Goldklang (on camera): So where does FEMA put the trailers for people like Irene?  In many cases mobile home parks like here in Fenton.

Reporter:Someplace Irene didn't want to go, so she turned the trailer down.

Readers: Have you been displaced by the floods? We want to hear from you. Email us at editor@watershedpost.com, or tell us about your predicament in a comment below.