With emergency past, Shandaken town government gets back to business and budgets

“We are now 36 days after Irene, and recovery efforts continue,” was the opening comment of Shandaken Town Supervisor Rob Stanley at last night's Town Board meeting.

Stanley pointed out that there are a number of sources out there to help residents and businesses alike recover from the floods, including SHARP, the Rotary, the Timberlake Foundation, and the Catskill Watershed Corporation. Applications for these are available online at the town website, or at the Town Clerk’s Office and Tender Land Home on Main Street Phoenicia.

The town of Shandaken has started applications for municipal aid from the Federal Emergency Management Agency to assist in the recovery of infrastructure and repay the costs of the disaster. The Board unanimously passed a resolution to request that Governor Andrew Cuomo and the state Legislature direct the state to cover the 12.5 percent portion of recovery costs which is supposed to be paid by local governments. The state has paid these costs in past disasters, along with its own share of 12.5 percent, leaving 75 percent to be paid by the federal government.

Several attendees at the meeting pointed out that Mt Tremper was again flooded in a heavy rain last week. “Every time it rains now we are back to a flood,” agreed Councilman Malloy. Eric Hofmeister, the town's Highway Superintendent, explained that the area around the Route 28 bridge at Mt. Tremper is “not town property,” and is the responsibility of the State Department of Transportation (DOT). Stanley and Hofmeister will contact the DOT this week to try to resolve problems in the area.

Hofmeister told the Watershed Post that there are still four town bridges washed out, including Hatchery Hollow, Alpine Mountain, and Eagle Mountain in Oliverea. “We have completed most of the work on Stony Clove and we anticipate completing the work at Simpson Mini Park during this coming month,” said Stanley. 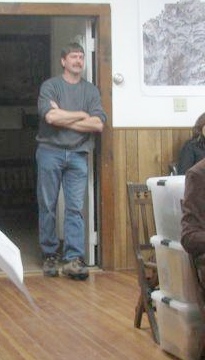 Attendees and town officials agreed that the creeks running through Shandaken are in terrible shape. Stanley pointed out that the engineering firm Tetra Tech of Morris Plains, New Jersey, had been hired by the Town Board to assist in creating a “Flood Hazard Mitigation Plan,” paid for through a grant from the Ashokan Watershed Stream Management Office and the New York City DEP. Tetra Tech will make assessment visits to areas of the Town and will attend Town Board meetings during the next year to report their findings.

“We should go through every creek from the mouth down, dredge everything and stabilize the banks,” said Rick Ricciardella, Water Supervisor of the Phoenicia Water District. "If we don’t do this, we will be in big trouble." 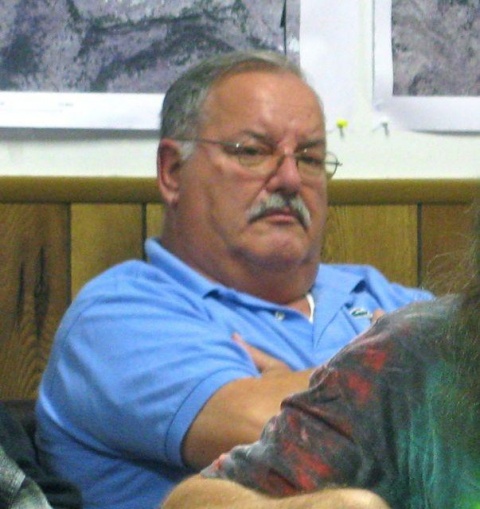 Rick Ricciardella, Water Superintendent in Shandaken, and an outspoken advocate of stream dredging and bank clearance.

A proposal to have Phoenicia Elementary School approved as an Evacuation Center is being prepared. During the flooding, Phoenicia was cut off from the region, with no power. The school would be a center in future disasters where people could receive assistance.

Several expressions of gratitude for help in flood recovery were made by meeting attendees. One local resident read a letter of thanks for the students from a Bruderhof school who came to his house and dug out his mud-covered basement.

At the meeting, Stanley also presented the “2012 Preliminary Budget for the Town Of Shandaken.” The total budget is based on projections of $1,638,998 of tax revenue, plus $175,000 unexpended balance, plus other estimated Town Revenue, for a total appropriation of $2,330,148. The preliminary budget is 1.14% higher than the 2011 budget, with an increase of the amount to be raised by taxes of .05%. There will be no increase in the salaries of the elected officials of the town.

Property taxes provide 70 percent of the town revenue, followed by ambulance fees (7.3 percent), and Ulster County Sales Tax (4.72 percent). Building permit fees are only .43% of town revenue, and dog license fees provide only .06%. The table below shows the importance of other revenue sources for the Town of Shandaken.

Stanley announced that there will be a public hearing on the 2012 budget the day after Election Day, Wednesday November 9 at 6:00 pm at the Town Hall.

Former Town Supervisor Peter DiSclafani raised the question of public access to town financial information during the meeting, and was assured by Stanley that there is open access, although the current press of flood related business has slowed the response to requests temporarily. 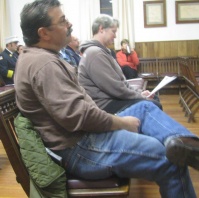 Former Shandaken Town Board Member, and Town Supervisor Peter DiScalafani at Monday’s meeting. In the same row is Kathy Nolan, currently a candidate for Town Supervisor.

The Phoenicia Library (which was damaged heavily in a fire earlier this year) is requesting an $11,000 budget increase for next year.

Kurt Boyers, President of the Library Board of Trustees, made a statement which summarized the extensive services provided by the library in the face of constant budget cuts. “The budget has been unchanged since 2006…there has been an 88% decrease in state and county funding while the library usage has doubled. The Phoenicia library is the “official” library for the Town of Shandaken. Boyer said “everyone in town benefits from having a library, it is one reason why people find Shandaken a nice place to live.” The library now costs each homeowner $25.00 per year. If the budget increase goes through the cost will be an additional $3.00 per year per homeowner. 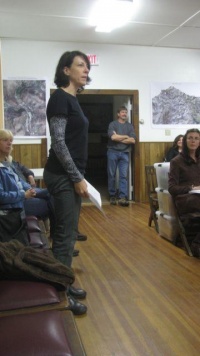 The Board also unanimously passed a resolution to renew the 2006 lease with Kaatskill Development Partners LLC on the so-called Emerson Fields for the price of one dollar, with the lease to run until December 31, 2016, with the total price not to exceed five dollars. These fields are used for soccer for all age groups throughout Shandaken, including Onteora School. The maintenance on the fields is shared by the Onteora School District and the Town Highway Department.

Parks and Recreation Chairman Roberts explained the “reservation protocol” for reserving the Emerson Fields for soccer in a second resolution which passed unanimously. The Fall deadline for reservations will be July 15 and the Spring deadline November 1, submitted to the Town Clerk. Conflicts on reservations will come before the Parks and Recreation Board, with the deadline for Fall conflicts set at the second Monday in August, and for Spring conflicts, the second Monday in March.

The Town Board established a Halloween curfew for 9:00 pm on October 31, continuing until daylight. The curfew bars all people under the age of 18 from being on the street during these times unless they are with a parent or guardian.

Captain Richard Muellerleile of the Town of Shandaken Ambulance Service devoted his report to “Safe Halloween Tips” suggested by the Center for Disease Control. He reminded drivers to watch pedestrian travel carefully and to especially watch “leaf piles that children routinely hide and play in.”

The Town Board agreed to hold a public meeting for a presentation by the Catskill Watershed Corporation (CWC) on the proposed Phoenicia Sewer at 6:00 pm on October 20. Stanley and Councilman Vincent Bernstein will meet with the CWC and engineers from Lamont Engineering to discuss options at some point prior to the meeting.

Brittani Suto, the most recent Shandaken Museum Director has resigned due to a promotion at her fulltime job. The resignation comes just a few days before the reopening of the library had been scheduled. Rob Stanley reported that “the Museum Board is mulling over whether it is worthwhile to advertise for a new director at this time, or wait until spring as there are other issues in the building that need to be addressed.”

Councilman Jordan announced that “I Survived the Flood” T-Shirts are now on sale at the Big Indian Fire Station.

The next Town Meeting will be held on Wednesday, November 9 at 7:00 pm.

10/6/11: This story has been corrected. Kathy Nolan is a candidate for town supervisor, not the Town Board.