Dispatch from Olive: Not the brightest fall 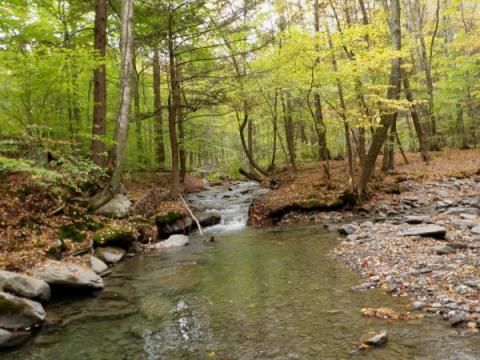 Photo of the Bushkill Creek in Olive by Ed Ostapczuk.

I remember more vivid autumns. Then again, I don't remember mowing the grass in the middle of October. I think all this rain caused the leaves to drop before they turned their bright colors. Mother Nature is confused. One day we have ceiling fans blowing eighty-degree temperatures around, and the next day I am huddled next to the woodstove. Leaves are falling making our view of the Ashokan Reservoir visible again; however, it is not the silver puddle in the distance it usually is. It is more the color of Yoo-Hoo.

Not only are leaves falling -- rumors are ﬂying around as election time draws near. The damages from the Hurricane have brought us together in some ways; the Olive Emergency Relief Fundraiser exceeded our goal of $10,000, so those who placed requests will soon receive grants from ALL money collected.

Speaking of grants, the CWC has allotted over $5 million to flood-damaged businesses in the watershed towns. Olive's share of that was $329,000. That amount will be divided in chunks of up to $30,000 each for businesses suffering damage to their buildings. At the last Town Board Meeting, Supervisor Bert Leifeld expected that the grant would be distributed to Boiceville Businesses in the next few weeks. The outright grant is a boon to business owners awaiting ﬂood and private insurance adjustments and FEMA payments.

The Shandaken Theatrical Society will be holding a fundraiser, "Songs From the Silver Screen", to raise the roof for the theater. Ann Osmond and Dennis Yerry are joined by Grammy nominated writer-performer Robert Burke Warren, also known as Uncle Rock, for a show featuring a mix of memorable music that spans decades and styles. The event takes pace on Saturday, October 29 and November 5 at 8 p.m. Reserved seating tickets are $20. Call 688-2279 for more information.

The hurricane, unfortunately, divided us in other ways. Frustration of ﬂooded roads and bridges, especially in West Shokan and Samsonville, left a few dozen residents upset when federal, state, county and town government cannot proceed with haste. Everything seems to be tied up in a bright red ribbon of red tape. To make matters worse, repairs need to be done now before winter's snow and ice exacerbate the clogged streams and eroded road beds.

With a two percent cap on town budgets imposed by the state, the hundreds of thousands of dollars needed to work now is not in the budget. Even though the town has asked to be paid back by FEMA at 100 percent, not its usual 75 percent, the damage -- estimated at $2 to $4 million -- is beyond a small town's resources. Olive, like Woodstock, Hurley, Rosendale and many other towns, is considering passing a local law (Local Law #1 of 2011 to Override the Tax Levy C Limit Established in General Municipal Law3-C) as a security blanket for emergency repairs to be be repaid when all monies trickle in (pardon the pun). Seems like ﬂood relief has a dam of bureaucracy that only allows a small stream of funds to reach those who need it most.

At a meeting with FEMA representatives, Olive was commended for being the ﬁrst town in Ulster County to submit all the completed paperwork. That puts us at the head of the list to be considered for estimates and adjustments, but promises don't always "hold water."

Many residents do not realize that Olive's proposed budget will fall below the two percent tax cap. That information was made public at the Town Board Meeting on October 11, 2011. Without real information to replace fear-driven rumors, some people sitting high and dry are fearful of an exemption from that cap. What they may not realize is that next time a disastrous emergency could impact them too, not just a handful of people who live along the Esopus or Bushkill Creeks and who need help now. They are confusing budget and legal ﬁnancial constraints. What happens if Mother Nature isn't done with us? Tornado? Earthquake? Blizzard?

Olive now has some newspaper coverage -- and for those who are computer savvy, there are websites, the Watershed Post, Facebook, and Twitter. Trouble is, there is not a town center, a community center, or news network that allows information to ﬂow accurately to all ears. Unless we are all aware of what is going on, rumors and misunderstandings will ﬂy like the leaves of autumn.

A good idea for voters would be to attend the Meet the Candidates Forum sponsored by the Watershed Post and run by the League of Women Voters, which will be held from 10 a.m. to noon tomorrow, October 22, at the Town Meeting Hall on Bostock Road, Shokan. Come armed not with a personal agenda, but with questions about hot issues like the Tax Cap Override, the Master Plan, recovery problems, and budget concerns. Come and ask questions to compare answers.

Olive resident and former Onteora English teacher Carol LaMonda was the author of a long-running column in the Olive Press, "A Jar Of Olives," before the paper shut down in 2010. She is also the wife of current town council member Bruce LaMonda. We're delighted to feature her writing on the Watershed Post and its Olive town news page.