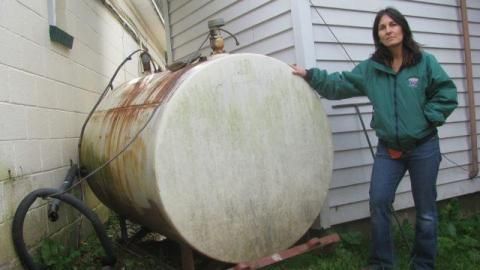 Cobblestone Motel owner Kimberly Wendt with a wrecked fuel oil tank, which was lifted by floodwaters and wedged between two walls of the motel. Photo by Rusty Mae Moore.

After 62 years in operation, the Cobblestone Motel in Phoenicia closed down during the Irene floods, at and hasn't reopened since. Flood waters penetrated the walls of some units, broke power and telephone lines, and wrecked the fuel oil tank.

Kimberley Wendt, the motel's owner and sole employee, made a plea for help at the Shandaken Town Board meeting last Wednesday.

Wendt expresses frustration with the town at the Shandaken Town Board Meeting on Wednesday, November 9. Wendt told the Town Board that she had not been running for over two months, had received no help from the town, and was angry.

“Everywhere I turn, I am turned down," she told the Board.

For small businesses like Wendt's, the road to recovery has been difficult, and few resources are available to help. The only federal help for most businesses comes in the form of low-interest loans from the Small Business Administration, which many business owners cannot afford to take out.

One of the only lifelines available to local businesses that were damaged in the floods has been a $5 million program set up in September by the Catskill Watershed Corporation to give out grants of up to $30,000 per business, for repairing damaged structures. The money is only available to businesses inside the New York City watershed, and the responsibility for choosing which businesses get the grants has fallen to the towns.

On October 18, the Shandaken Town Board passed a resolution approving 33 businesses to receive grants from Shandaken's share of the CWC funds. The Cobblestone Motel was not on the list. (The full list, and the text of the resolution, is in a document attached to the bottom of this post.)

Not every business will receive the full $30,000; the amount will depend on how badly the building that houses the business was damaged, and some businesses on the list only had minor damage in the floods.

At last Wednesday's meeting, Wendt challenged the board, saying that she has been “made to feel uncomfortable as a member of this town because I am not a business on Main Street.” She said that she had heard that there was a list of businesses slated to get CWC grants, but that her motel was not on it.

Shandaken supervisor Rob Stanley said that there was an application for the program posted online at the town's website, and that she should “give us an application, it's as simple as that.”

Stanley introduced a resolution on the spot for the Cobblestone to be put on the list for the CWC grant program if Wendt puts in an application and complies with the requirements for the program, which the Board passed unanimously.

Ruined paneling and damp insulation taken from Room 2 of the Cobblestone Motel after flood waters from Stony Clove Creek penetrated the interior concrete block wall of the unit.In a later interview at the motel, Wendt told the Watershed Post that business has been weak for several years due to the financial meltdown and recession, and that the motel has just been breaking even. The crisis of the flood now threatens to put her out of business for good.

Wendt operates the motel by herself. She said she has limited time to seek assistance
with government and private agencies, and has had communication difficulties due
to power, telephone, and internet outages. With no cash flow during the past two months, she has fallen behind on her utility bills, mortgage, and insurance payments.

Even after receiving a letter this week from the town inviting an application for the CWC financing program, Wendt says she does not know whom to call to obtain the estimates on renovation costs required for a grant. With winter coming on, there is no heat because the fuel tank and pipes have been broken and dislocated. There is a danger that the pipes will freeze.

Wendt says she has no money for digging mud out of the cellar, removing/repairing paneling, rugs and insulation, and fixing the phone system. She plans to sell some of the beds and bedding used in motel operations to get cash for food.

Wendt said that she turned to speaking at the town meeting on Wednesday so that she would appear on the meeting telecast on Channel 23, and was hoping she might get offers of help.

"I am really in need of a good neighbor experience right now," she said.