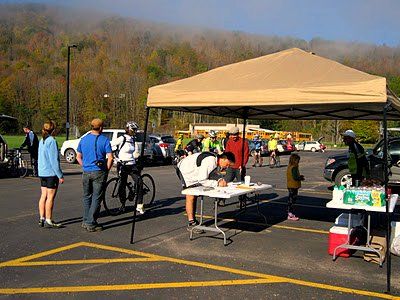 Above: The Catskill Mountain Velo Club raising money for a kids' bike fund at the Belleayre Mountain Fall Festival in October. Photo via the Catskills Cycling blog.

Mike Wentland, the brains behind the Catskill Mountain Velo Club, is giving back what Irene took away: kids' bikes.

In October, with the help of Shandaken town clerk Laurilyn Frasier and the Belleayre Mountain Ski Center, Wentland raised about $1800 at a booth at the Belleayre Fall Festival, all of it destined to put new bikes "under the tree during the Holiday Season."

Wentland came up with the project in September, just as the Catskills were beginning to recover from the flooding caused by Irene and Lee. Here's what he wrote about the project on his blog, Catskills Cycling:

Charity is a funny thing. There are many different forms and styles of giving. In fact, there is even a sense of priority toward giving after disasters with the most basic needs of food, shelter, water obviously addressed first.

An application for a new bike from the fund is available on Wentland's blog. Click here to get it.

Wentland is still collecting donations for the bike fund. You can give here:

Wentland and Frasier sent us a letter today describing the project. Read it in full below:

On behalf of the Catskill Mountain Velo Club and the children who were victims of the flooding that occurred from hurricane Irene, we would like to take this opportunity and thank all of the people who contributed to our fund raiser and made it possible for us to restore some joy into the lives of the children who have lost so much from this catastrophe.

Thank you to the staff at Belleayre Ski Center for your assistance. You provided us with a booth on Columbus Day weekend from which to solicit donations. Tony Lanza and his staff have proven to so many the importance of Belleayre to our community. This continued unselfish commitment to continue support for our local community recovery efforts shows everyone the character of the staff at Belleayre and why it is a vital link to all who live here.

A special thanks also to Jack Jordan and Patty Rudge for donating a portion of their weekend to man our booth at Belleayre.

The monies obtained, $1850, will be used to restore as many bikes as possible. We will continue to solicit anyone who is interested in donating bikes in good shape to extend our effort to as many as possible. We are most in need of bikes for children ages 5 to 15. Anyone who wishes to donate may send their donations c/o Michael Wentland Catskill Mountain Velo Club P.O. Box 174 Big Indian, NY 12410. Checks maybe made out to Catskill Mountain Bike Recovery.

Thank You for your support

Cycling the Catskills: From steep trails to smooth sails