Above: Loch Sheldrake resident Della Weekes, who stopped by the Red Cross shelter at the Sullivan County Community College Field House on Friday to warm up and have a shower before going to work. All photos by Jason Dole.

Every day, electricity returns to more and more people in Sullivan County. Along with it comes warmth, light, and a little bit of normalcy. But with power outages threatening to stretch into next week in some places, more and more people are also making use of emergency shelters, warming stations, and distributors of dry ice.

“There are about 75 people staying here tonight,” said Donna Borner, manager of the emergency shelter organized by the American Red Cross at Sullivan County Community College. At that point, around 9pm on Friday night, another family walked through the door.

“Last night we had 31,” said Borner. “It escalated because of the cold. We're still expecting more people tonight.” 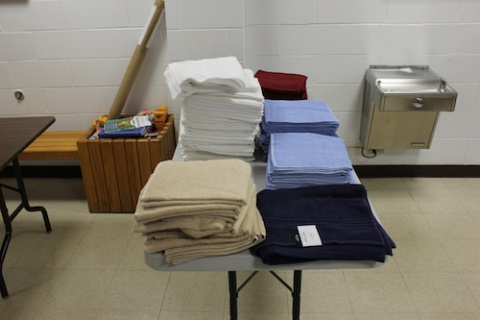 Towels donated by Wal-Mart in Monticello.

Shelter organizers have a trailer nearby with enough materials to handle 400 people, if needed. The Red Cross supplies cots, blankets, and comfort kits with a washcloth, plastic razor, soap, and other toiletry items. Towels were donated by Wal-Mart. Frankie & Johnny's Restaurant (Nardi's) in Hurleyville has donated food.

The shelter opened Tuesday in SCCC's Paul Gerry Field House. More people come every day as the temperature drops and awareness of the shelter rises. Some come for a little while, others come to stay. They get away from the cold, take a warm shower, have a hot meal.

One of those folks is Della Weekes of Loch Sheldrake. She has no electricity but gets a little heat from her gas stove. Weekes stopped by the emergency shelter around midday on Friday to warm up and take a shower before heading to work. Over lunch, she described the storm as it hit on Monday night.

“It was awesome,” said Weekes. “I was in the trailer. Never saw anything like that before.”

“No. I prayed the whole time. Me and The Almighty had a good talk,” she said.

Weekes said the windows rattled, the doors shook, but “nothing came off.”

“I was watching the trees as they bowed down,” Weekes recalled in a humbled tone. “God is awesome. I have my life and I have my home. ” 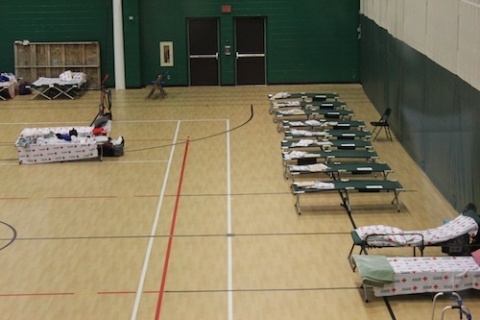 Cots lined up at the shelter at the Paul Gerry Field House at Sullivan County Community College.

Another guest at the shelter spoke quietly, saying her name is Carolyn and she lives in Woodridge. She's on medication and stays in Eagle Ridge, a senior housing complex.

“We don't have no heat,” said Carolyn about why she came to the emergency shelter. “It's hard washing up in cold water. It's been cold all week. Every night I cried.”

Carolyn explained that Rosalind, her “landlord,” told everyone at Eagle Ridge about the shelter. “Some left, some stayed in the apartment. I got a ride here with Rosalind.”

Rosalind Natale is not actually a landlord, but the executive director of the Woodridge Housing Authority, which is subsidized by HUD to provide housing for low income families, seniors, and the disabled. She went door-to-door before the storm, telling all of the residents at both Eagle Ridge complexes near Woodridge to charge their batteries, get food, get ice, and be prepared.

“For the most part they were,” said Natale. “but it was even worse than we thought it was gonna be. When I heard there wouldn't be electric for a few days, I escorted Carolyn and another gentleman to the shelter. This way they'd have some food and they'd be warm and safe.”

Natale was keeping an eye out on all of her residents before and after the storm, but she doesn't think she went above and beyond the call of duty. She just knew they were without hot water and heat.

“It was the best I could do,” she explained. “I tried to find generators, but there were none for miles around.”

Around 3pm on Friday afternoon, the power was back on at Eagle Ridge's complex on Maple Avenue, but not at the one on Mountaindale Road. More than half of Glen Wild Road, stretching from Woodridge to Rock Hill, was without power. 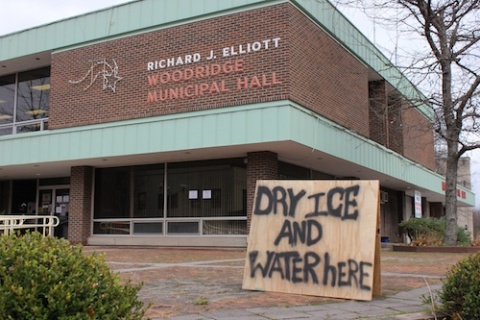 Woodridge Municipal Hall is one of many "warming stations" around Sullivan County.

Woodridge Fire Department chief David Begbie estimated only about 60 percent of people in the Town of Fallsburg had electricity returned by Friday afternoon. That's why he was at Woodridge Municipal Hall, one of a number of “warming stations” set up around Sullivan County that offer people a chance to get warm, charge their devices, get water and food, and possibly to get dry ice or take a shower.

“We're gonna be doing this 24/7,” said Begbie. “We will be constantly open until everybody's up and running, probably at least Monday.”

So, at the many warming stations at town halls and firehouses, at schools that have turned into shower facilities for the public, and at the shelter at SCCC, help is available in Sullivan County. And as Borner has seen, people are making it happen, from the Red Cross volunteers that have come from around the country, to folks just walking in off the street.

“People are coming in constantly asking what they can do to help,” said Borner. “One lady came in with games to give to the children. Another came with books. I ask them, 'How is your house?', and they say, 'We're without electricity, but we really want to help.'”

As the nights get colder and the power remains off, that help is becoming even more crucial.